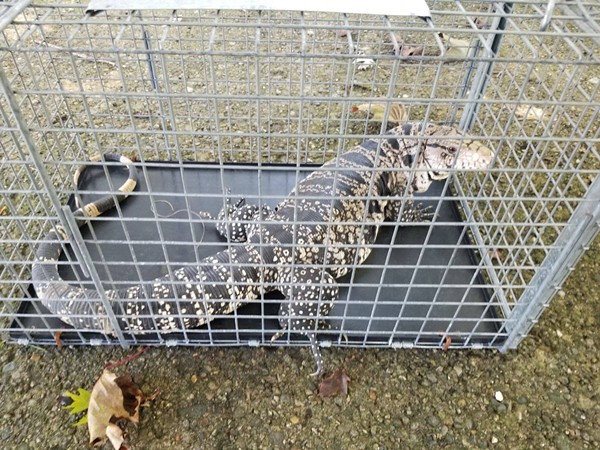 Giant reptiles seem to really be feeling the Midwest this week.

A few days after a four-foot long caiman was discovered by a fisherman in Lake Michigan, a large lizard was found "relaxing" on the porch of a home in Dearborn Heights.

The homeowner, Richard Heatherly, saw the two-foot lizard outside his home on Tuesday, Oct. 9; when he opened the door, the unidentified creature ran for the dog house where Heatherly managed to contain it.

"When I locked it in the doghouse, I figured it was hungry because it was eating the dog food so I got the apples and oranges and put them in the doghouse and put a block there and called the humane society," Heatherly told WXYZ-TV.

The animal was collected and taken to the Michigan Humane Society. The City of Dearborn Heights Ordinance and Animal Control shared a post on Facebook in an attempt to locate the reptile's owner. The lizard was quickly identified by Facebook users as a tegu, a species of reptile native to South America which often kept as household pets because of their docile nature.
If you have any information about the lost tegu, you can call animal control at  313-791-3482.