The Gilchrist Detroit property 'controversy' appears to already be over 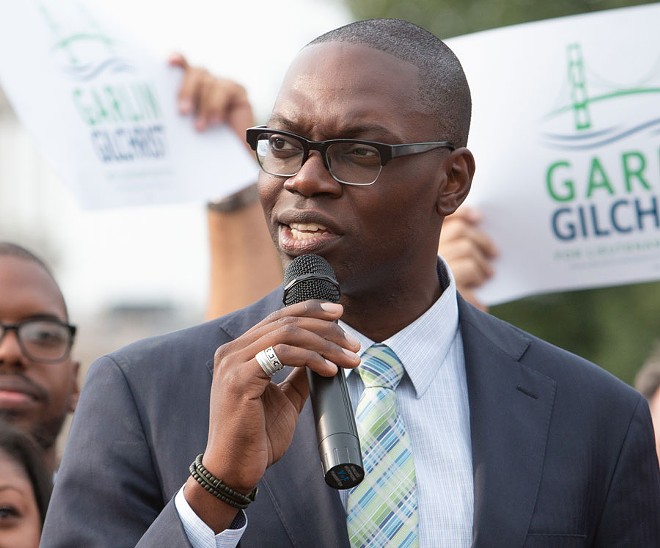 Well, that was quick. It seems like the whole Garlin Gilchrist II controversy has ended — at least for now.

To recap: Gilchrist, Democrat gubernatorial nominee Gretchen Whitmer's lieutenant governor pick, was revealed to be the owner of a blighted North End duplex in a story by Charlie LeDuff published Friday on Deadline Detroit. Gilchrist, who previously worked for Mayor Mike Duggan, acquired the property in 2016 for just $27,000 using a 50 percent discount for city employees, but the building remains vacant and in disrepair, and a nuisance to neighbors, who accuse him of speculating in a soon-to-gentrify neighborhood.

That wasn't the end of it. Deadline published at least six stories about the building in three days, calling for Gilchrist to be forced to give up the property. It was quickly picked up by others in Detroit media, with a Detroit News story reporting Gilchrist had a history of unpaid back taxes at the property.

Of course, the controversy was swiftly seized upon by Whitmer's rival, Republican Bill Schuette, who recorded a video in front of the building. "He can't manage this or Michigan," Schuette, who has also been polling behind Whitmer, tweeted. "Gilchrist should resign from the ticket."

@gretchenwhitmer's first big choice was picking @garlin, despite thousands in elections fines. Now he's ignored warnings for his rotting rental officials say is a threat to the kids we saw riding bikes. He can't manage this or Michigan. Gilchrist should resign from the ticket. pic.twitter.com/SBBEsQUXCw


It seems, however, that Gilchrist was able to quickly lay the issue to bed. On Tuesday, the Land Bank issued a statement saying Gilchrist paid off the back taxes and sufficiently cleaned up and secured the property over the weekend, adding that it "will continue to work with him to see the project through to completion."

For a few days, the story seemed like a big deal in the local media circle jerk, but we're not sure how big of an issue it'll be with voters who don't live next to 253 Marston Street. Of course, people running for office should be held accountable, and the report brings up a number of important threads pursuing — like possible Duggan cronyism (Gilchrist was reportedly given a pass on blight tickets, while the city has ramped up blight enforcement on just about everyone else), or how insurmountable these Detroit rehabs can be (Gilchrist, who Deadline reports hails from the "toney suburb" of Farmington, said he has had trouble securing the funding necessary to complete the project).

Bill Schuette’s record as attorney general should scare the pants off you
By Lee DeVito
Local News
But the controversy of Gilchrist's Detroit duplex, per se? The state of the building appears to be par for the course for current and former Land Bank-owned properties. If anything, Gilchrist has noticeably improved it: On the left is how the property appears on Google Street View from 2013. On the right is the photo Deadline used. Under Gilchrist's ownership, the building at least has added windows and a fence.

The "controversy," as much as it was one, calls to mind last year's Fox 2 report about Detroit councilwoman Raquel Castañeda-López's run-down Southwest Detroit home, which was widely viewed in her community as the media "punching down" on a minority... as reported by Deadline Detroit.