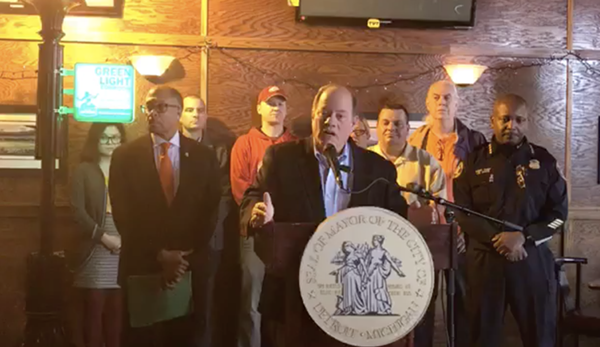 You’re about to start seeing some more of those Great Gatsby- blinking green lights around the city.


Mayor Duggan and the Detroit Police Department announced today the expansion of the controversial real-time surveillance program, Project Green Light, to Corktown, a neighborhood that has seen massive investments recently.


The thinly stretched Detroit police department has increasingly relied on Project Green Light, which tasks accepted places of business and residence with purchasing or leasing their own camera system. The cameras supply a 24/7 feed to Detroit’s surveillance center, manned not by officers but rather “62 civilian crime analysts,” who use the feed to identify and track down suspects.


It costs businesses between $4,000 - $6,000 to join the program, according to the project’s website, but it offers some significant benefits including regular visits from officers and “priority 1” treatment in case of emergencies.


The program has garnered criticism surrounding inequity in police attention and privacy issues from business owners, the American Civil Liberties Union, and students. Mayor Duggan, police chief James Craig and other officials did not address these concerns at a press conference Wednesday.


“Whenever you bring in new ideas, especially when they’re far-fetched, there’s going to be some resistance,” says Craig.


But that hasn’t deterred the Police Athletic League and five restaurants and bars in Corktown from signing on to form the new Corktown Project Green Light Commercial Corridor along Michigan Avenue. The decision comes just months after Ford Motor Company announced its plans to open a new Corktown Campus in the historic Michigan Central Station and throughout Corktown. Ford is asking for more than $104 million in tax incentives for the investment.


“We do expect, in the not too distant future, we are going to keep moving,” Mayor Duggan says. “Right now we’re basically from the Lodge to the old Tiger stadium site, but we think we will be pushing all the way to Rosa Parks in the next year.”


Corktown is the second established Greenlight Corridor in the city, preceded by one established in Greektown earlier this year. In total, the project now includes more than 400 businesses, but the ACLU says that there’s almost no evidence that the increased surveillance has caused the drop in crime, according to the Free Press.


Billy Jawad told Metro Times earlier this year that he paid $7,000, after a robbery-turned-deadly shooting, for his gas station on 7 Mile and Meyers to join the Green Light program in 2016. The investment was necessary for adequate policing, he said.


“It’s more of a ‘pay and we’ll come or don’t pay and we’re not coming,’” said Jawad, who at the time said he still had to phone each incident into 9-1-1. “We used to call Detroit police and sometimes they wouldn’t come the next day. The longest they take now is 10 to 15 minutes.”


Not every business can afford to join Project Green Light, but police chief Craig appeared unconcerned that less profitable businesses may be left out of the benefits.


“This is a neighborhood initiative. Greenlight was birthed in the neighborhood,” says police chief Craig. “I don’t care what neighborhood you go into today, you’re going to see that distinctive green flashing light.”

Will Feuer is an editorial intern at Metro Times.
Stay on top of Detroit news and views. Sign up for our weekly issue newsletter delivered each Wednesday.