Detroit was never going to reward the GOP for its revival 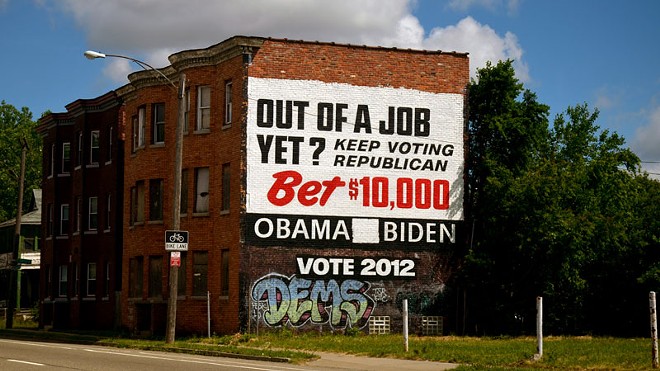 A story out this week from the Associated Press discusses how some Republicans are lamenting that the GOP is unlikely to reap any rewards on the Nov. 6 election. Although the party shepherded Detroit through bankruptcy and into economic revival, Democrats are still expected to win big this election.

"During their eight years in control of Michigan's government, Republicans have had one achievement that stands out: successfully taking the city of Detroit through federal bankruptcy to make way for its economic revival," the AP reports. "Now that feat may bring a bittersweet reward." That "reward" is a resurgent Detroit, but one indifferent to the GOP.

That's an interesting way of looking at things. Let's be honest: Republicans were never going to get rewarded for Detroit.

Yes, it was Republican Gov. Rick Snyder who appointed emergency manager Kevyn Orr in 2013 to oversee Detroit's bankruptcy. "[Snyder] deserves all the credit, or at least a good chunk of the credit" for Detroit's rebound, GOP consultant Tom Shields told the AP.

But recall: The majority of Michigan voters never wanted emergency management in the first place, voting to repeal the law in a 2012 referendum. It was the Snyder-led Republicans who then rammed through a referendum-proof version of the law anyway – negating the will of the people. A Snyder-appointed task force even found the law, which has been primarily used to usurp local democratically elected representation in black communities, to be part of the systemic racism that led to the Flint water crisis.

The AP story makes just a passing acknowledgment that the same EM law that revived Detroit also led to the poisoning of Flint. But which city do you think Michigan's GOP will be remembered for?

The AP also acknowledges Detroit's comeback has been largely confined to the downtown business core. They also place blame for Detroit's Democrat entrenchment on the millennials moving to the city: "Now the city's downtown and some urban neighborhoods are attracting thousands of young, likely left-leaning professionals to an expanding job market."

Although it's easy to blame the Republican plight on millennials, what the AP fails to mention is that the city hasn't been a Republican stronghold for generations. The last time Detroiters elected a Republican mayor was Louis Miriani in 1957 when the city was still mostly white.

Nevertheless, for some reason, Republicans keep thinking Detroit is theirs.

During the 2016 campaign, The Washington Post noted "[the] odd Republican obsession with Detroit" — that GOP politicians and pundits routinely hold Detroit up as an example of Democrat failure and how they can fix it. That ignores the fact that white flight and the loss of manufacturing jobs started back in the '50s, back when the city still had Republicans mayors, and that many conservative policies — outsourcing manufacturing, attacking unions, and austerity — have only exacerbated Detroit's problems.

This whole Donald Trump thing sure didn't help the GOP's cause, either: in the Motor City, Trump earned just 3 percent of the vote.