Put-in-Bay hopes to end Christmas in July, blaming busloads of visitors from Detroit and unruly crowds 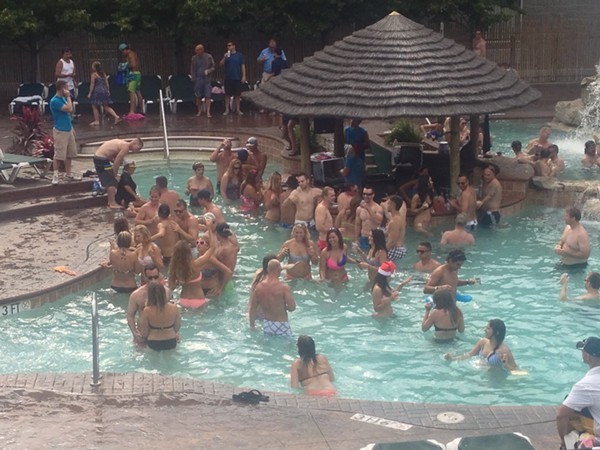 Put-in-Bay's annual Christmas in July festivities are not an official celebration, in so much as they're not recognized and promoted by the local tourism bureau and haven't been since 2013, but people still arrive en masse anyway. Citing an already busy summer schedule, as well as "busloads of visitors from Detroit" and general discontentment with young people drunkenly enjoying themselves at past events, the chamber of commerce is now asking individual businesses to cease promoting any such Christmas in July events, according to the Port Clinton News Herald. Here's how the Put-in-Bay Gazette summarized their feelings on the 2018 affair, which drew thousands to the island, and which the tourism bureau cited as supporting evidence in declaring 2019's holiday weekend canceled.

The streets were jammed by gawking golf carters long before the lunch hour. By noon, the streets of the village were jammed with carters looking for parking and places to party. Many had their own coolers filled with soft drinks and water. Some had those funny smelling cigarettes, plus some of the women weren’t exactly modest when it came to their wardrobes. If you didn’t know any better you’d have thought Put-in-Bay was ground zero for the Miss World Fat Booty Twerking Pageant.


The Miss World Fat Booty Twerking Pageant! Anyway, we're not entirely sure what Put-in-Bay thinks its appeal is in terms of tourism beyond what the party island is and has been known for, but they pretty adequately summed it up above. And we have folks festooned in Santa hats and not much else will still flock in droves.

This article was originally published in Cleveland Scene.