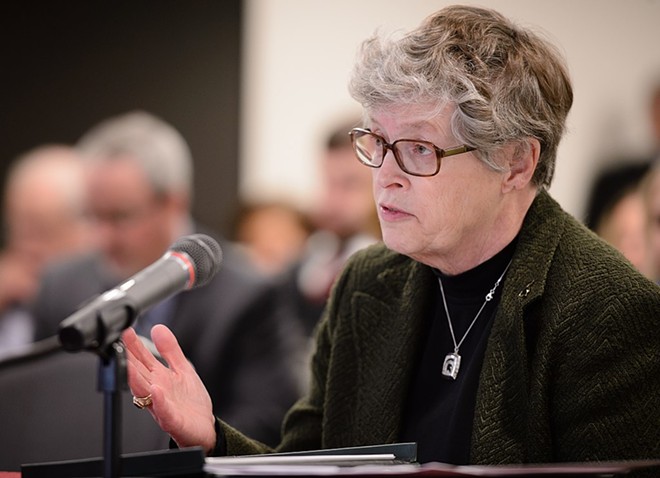 Former Michigan State University President Lou Anna Simon has been charged with lying to the police during the investigation of former MSU gymnastics physician and serial sex offender, Larry Nassar.

On Tuesday, Simon was charged in Eaton County District Court with two felony count and two misdemeanor counts, the Lansing State Journal reports. If convicted, Simon could face up to four years in federal prison.

Simon previously claimed that no MSU faculty were made aware of the allegations against Nassar prior to 2016. Before the U.S. Senate subcommittee in June, she stated, “Had I known that Nassar was sexually abusing young women, I would have taken immediate action to prevent him from preying on additional victims, including terminating his employment and reporting him to the police.”

Simon is the third former MSU employee charged in relation to the Nassar case. William Strampel, former dean at the school of osteopathic medicine, faces two misdemeanor counts for his actions taken in the 2014 Title IX investigation of Nassar. Former MSU gymnastics Kathie Klages has also been charged with felony and misdemeanor cases for lying to police about her previous knowledge of sexual abuse allegations against Nassar. MSU will be paying for the legal fees for Strampel, Klages, and Simon.

Lou Anna Simon became the first female president of Michigan State University in 2005. She resigned from her position as President of the university on Jan. 24, just hours after Nassar pleaded guilty to seven counts of sexual assault of minors. Nassar was sentenced up to 175 years in federal prison.

According to interim-President John Engler, Simon is taking taking "an immediate leave of absence, without pay, to focus on her legal situation."