After being vacant for 40 years, Detroit's Metropolitan Building is getting new life 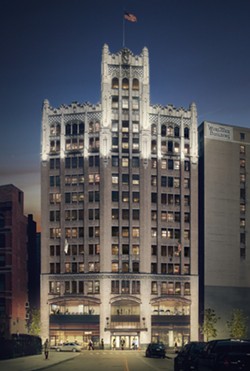 Detroit's Metropolitan Building will officially open its doors after being dormant for nearly 40 years.

Built in 1925, the Neo-Gothic landmark has been vacant since 1979. On Monday, however, the Metropolitan open its great hall for a preview of Element Hotel, a Marriott-affiliated extended stay hotel.

Neighboring the Siren Hotel, and just a mere block away from the newly opened Shinola Hotel, Element Hotel will round out downtown Detroit's new cluster of boutique style hotels.

The $33 million renovation project began in August of 2017 and will eventually include retail space and feature a rooftop restaurant and bar. The hotel will accommodate its first guests in January 2019, just in time for the North American International Auto Show.

The Metropolitan Building is located at the intersection of Library Street and John R. Element Hotel will open its doors today at 4:30 p.m. with opening remarks from featured speakers including Mayor Mike Duggan. A public reception will follow.