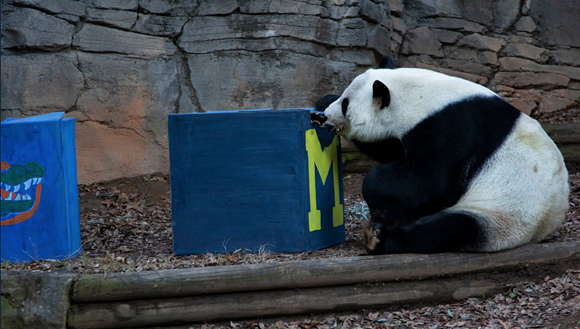 It's friggin' , folks — a 21-year-old giant panda at Zoo Atlanta just predicted that Michigan will win the coveted Chick-fil-A Peach Bowl over the Florida Gators.

The panda, named Yang Yang, made the prediction by chewing on a box marked with U-M's maize and blue logo.

This year's Peach Bowl will mark Yang Yang's third attempt in predicting the champions, and his second in a row of chewing on a box not belonging to a Florida team. In 2016, he correctly predicted the Alabama Crimson Tide to defeat the Washington Huskies. But last year, he predicted — incorrectly — that Auburn would take the win over UCF.

So far, Yang Yang is one for one, but the folks over at Metro Times sister paper Orlando Weekly are not taking kindly to this very intellectual, clearly fool-proof prediction process, going as far to call Yang Yang a "big dumb panda." Rude!

Maybe Yang Yang has a beef against the Gators because alligators are literal killing machines, or maybe, for our dear panda friend, it's just black and white: Michigan is 10-2 while Florida is 9-3. Suck on some bamboo, Florida!

The 2018 Chick-fil-A Peach Bowl is on Dec. 29, at noon EST. You can watch Yang Yang carefully choose the winner through research and logic below.