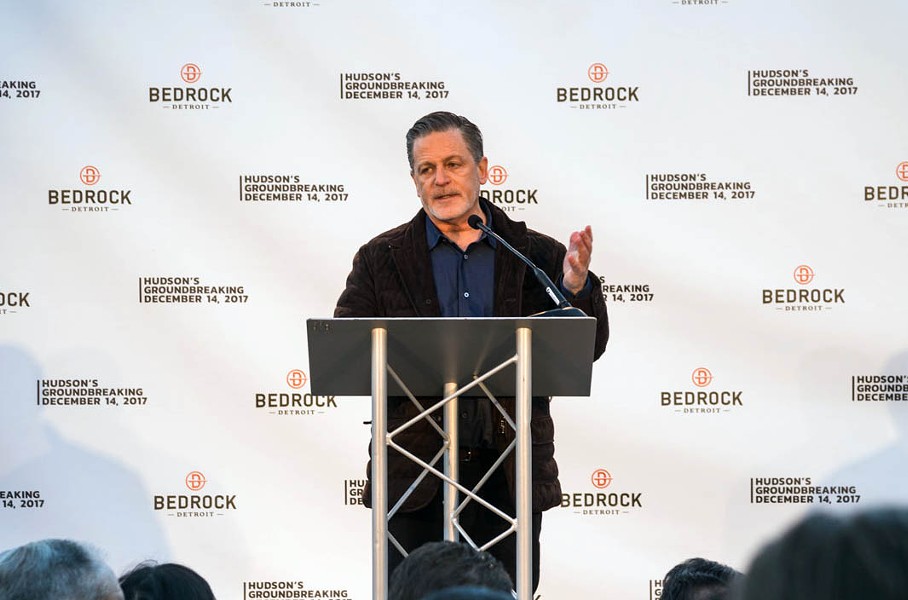 Like other powerful men — like President Donald Trump, say, or Elon Musk — Detroit's Dan Gilbert just can't seem to help himself when it comes to Twitter.

The billionaire used the platform on Thursday to retaliate against The Detroit Free Press following a lengthy investigation the paper published earlier that day, which detailed allegations that Gilbert's Bedrock Detroit essentially bullied state inspectors into keeping its hands off the company.

According to the report by Free Press journalist Jennifer Dixon, Bedrock was hit with a $3,500 fine — the company's first safety violation — after inspectors found windows were improperly and dangerously open during construction on the David Stott building downtown in 2016.

In response, the company sent its executives to Lansing for a rare meeting at Gov. Rick Snyder's office to "get an understanding of how the state views them and what they do" and "make sure everyone is all on the same page," according to emails obtained by the Free Press.

At a subsequent meeting, Bedrock execs were allowed to conduct "refresher training" to Michigan Occupational Safety and Health Administration inspectors, many of whom had decades of experience. The execs then allegedly told the MIOSHA inspectors that Bedrock was exempt from inspection, and "lectured them on how to do their jobs, emphasizing the company's role in downtown's resurgence," according to the report. The $3,500 fine went away, and Bedrock began to get less inspections, the Free Press found.

Gilbert took to Twitter Thursday afternoon to attack the paper, which is a tenant of a Bedrock-owned building.

In the first tweet, Gilbert does the very thing the Free Press report alleges his execs did — lecturing someone on how to do their job.

"My recommended :60 video training for @freep reporter Jennifer Dixon (@Jennbdixon) and all higher-ups at the struggling local media outlet," he wrote.

The video is a clip of actor Denzel Washington attacking the mainstream media. "If you don't read the newspaper, you're uninformed," Washington says in the video. "If you do read it, you're misinformed."

"What is the long-term effect of too much information?" he adds. "One of the effects is the need to be first, not even to be true anymore."

My recommended :60 second video training for @freep reporter Jennifer Dixon (@jennbdixon) and all higher-ups at the struggling local media outlet. "If you don't read the newspaper, you're uninformed. If you do read it, you are misinformed." https://t.co/NRCZJgeB32 https://t.co/YBZMagpsSj

Read below for @BedrockDetroit's statement on the Free Press article: pic.twitter.com/j9XL9bB1QY


Gilbert also posted a statement from Bedrock CEO Bill Emerson that denounced the story and reaffirmed the company's commitment to safety.

"The Free Press and Jennifer Dixon published a perplexing and disappointing article this morning that paints a false narrative with numerous twisted facts, wrong assumptions, and general inaccuracies," Emerson writes, in part.

"Safety has been and will always be the top priority at all of Bedrock’s work sites," he continues. "There is nothing we take more seriously and prioritize more than the safety of construction workers on our sites."

It's worth noting that the Freep story appears to be no rush job. The nearly 4,000-word story cites documents obtained though the Freedom of Information Act, property records, building permits, and numerous sources who were granted anonymity out of fear of retaliation. Indeed, a note on the article states the Free Press made multiple requests over several weeks for interviews with executives from Bedrock Detroit, which the company did not grant.

Dixon did not respond to a request from Metro Times for comment. In an email, Free Press senior news director for investigations Mark J. Rochester notes that Bedrock's statement failed to point out any specific inaccuracies in the report.

"Neither Bedrock executives nor Dan Gilbert have offered any substantive rebuttal to our reporting, merely dismissed the findings of our investigation by saying 'nothing to see here,''' he wrote. "We stand by our reporting."

It's not the first time Gilbert has fired back at the media.

In an April 2015 exchange, Gilbert responded to a tweet from Cleveland Scene editor-in-chief Vince Grzegorek after he posted a Motor City Muckracker story alleging Gilbert's security team had installed cameras on buildings it did not own.

. @vincethepolack @MCmuckraker "What is this?" Another libelous article. But you are used to that kind of thing, aren't you Vinnie?


"'What's this?' Another libelous article," Gilbert wrote. "But you are used to that kind of thing, aren't you Vinnie?"

In a follow-up tweet, Gilbert wrote, "I know. 'Ignore them.' Just once in a while you have to let the lying venom filled wannabes know they will be held accountable."

I know."Ignore them".Just once in awhile you have to let the lying venom filled wannabes know that they will be held accountable.Goodnight!


In another instance that same day, Gilbert made a transphobic comment against Lansing State Journal reporter Eric Lacy who tweeted, "Not sure I'd describe Dan Gilbert as 'Detroit street tough,'" in response to a Detroit News opinion column.

In retaliation, Gilbert tweeted, "This coming from a 'tough guy' who spends half his weekend tweeting about Bruce Jenner," in reference to celebrity Caitlyn Jenner, who had just come out as transgender.

. @EricLacy This coming from a "tough guy" who spends half his weekend tweeting about Bruce Jenner. Keep smirking, Lacy...


He's even leveled Twitter barbs at Metro Times, after we (erroneously) suggested the video Bedrock made to lure Amazon to build its new headquarters here appeared to feature doctored footage of Detroit. (OK, in our race to be first, we admit the media can sometimes get things wrong — but we make a correction when we realize we messed up, which we did.)

1/2 Slandering an honest artist for using a long lens to capture far away objects is a new low, even for the sly rags that spew venom daily https://t.co/AWnoTRB2lu


Gilbert's most recent exchange echoes President Donald Trump's crusade against a critical mainstream media, which Trump has infamously dubbed "fake news." Gilbert — who Trump once called "a great friend of mine, a supporter, and a great guy" — donated $750,0000 to Trump's inauguration through his company Quicken Loans.

Last year, it was revealed that the inauguration is under federal investigation into whether top donors had given money in exchange for access to the Trump administration. The investigation is ongoing.