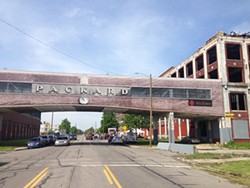 A spokesman for Arte Express, the developer that is renovating the Packard Plant, says the site's long-abandoned pedestrian bridge collapsed from "a preexisting structural issue, due to temperature fluctuations that caused the collapse," according to The Detroit News.

The bridge was jointly owned by Arte Express and the city of Detroit. No injuries or deaths were reported.

The iconic pedestrian bridge at Detroit's Packard Plant has collapsed.

The twitter account for HistoricDetroit.org posted a photo of the fallen bridge over East Grand Boulevard on Wednesday afternoon, as ice and wind storms gripped the Motor City.

The factory, designed by noted architect Albert Kahn with construction starting in 1903, has been abandoned for decades. In 2013, Spanish-born developer Fernando Palazuelo's Arte Express purchased the property in 2013 at Wayne County Auction with plans to fully renovate the site. The project is estimated to cost $23 million and construction is expected to take 15 years.


The Packard Plant bridge over the Boulevard has collapsed in #Detroit. #breaking pic.twitter.com/dfuRMAaMpF