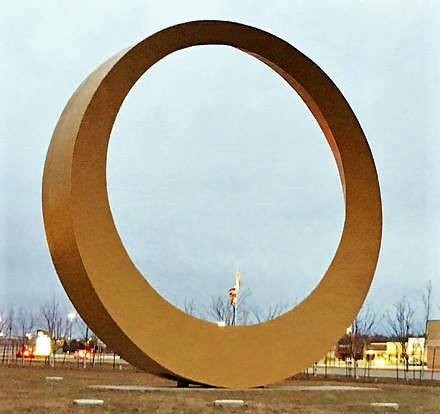 If the city of Sterling Heights wasn't on the map before, it is now, thanks to a very expensive and gaping monument erected earlier this month.

In an attempt to rebrand the city, a golden 35-foot-tall steel and aluminum circle was constructed in a median along M-59 near Lakeside Mall (between Art Van Furniture, Old Navy, and a Fuddruckers). The large "icon," which was completed Jan. 17, is meant to enhance Sterling Height, aka "The Golden Corridor," for residents, motorists, and "tourists" alike.

The page quickly amassed close to 7,000 likes and became a meme-generating joke machine dumping butt-puns as regularly as a high-fiber diet (the butthole's hours are even listed as always open). Others have made references to Sonic the Hedgehog, The Lord of The Rings' Sméagol, and major Avengers asshole, Thanos. But the page's true intention was to get the attention of the city's representatives.

The M59 Golden Corridor icon has been installed! The primary purpose of enhancing the Golden Corridor brand is to ensure the corridor remains a destination and to increase the number of visitors, shoppers and overall business development of the corridor. https://t.co/2NOrplaPL3


"Meet the newest waste of your taxpayer dollars. An over $300,000 expense for a giant gold ring on hall road," the page's first and pinned post reads.

Sterling Heights city council approved the sign package in 2017, which included two additional welcome signs and a smaller golden butthole. The cost? A mere $339,350 from the city's general fund, with some additional costs for electrical. Starting today, multicolor lights will be installed at the base of the statue because yes, the butthole will light up.

"We wanted to make a big splash, and we certainly have," Sterling Heights Mayor Michael Taylor told the Free Press. "I've seen the criticism and I certainly understand."

Taylor has not shied away from weighing in on the fun. On Wednesday the mayor dropped by the page to discuss "the most famous butthole in the country" and the concerns of its many critics. He even "liked" it.

"The name's a little crass for my taste but I love seeing people 'checking in' to the ring," Taylor posted. "In a strange way, your page is helping to reassure me that it was a good decision to build it. Although the name is ... ... the memes are really funny and creative. Keep up the good work!"

While the M-59 Golden Corridor icon may resemble a b-hole, the design harskt o other Michigan monuments like Hart Plaza's "Transcending" (aka Stargate), Bay City's "Friendship Ring" (aka toilet bowl), and the iconic Uniroyal giant tire on I-94. But even the icon's harshest critics can't help but stand in awe of its unique beauty.