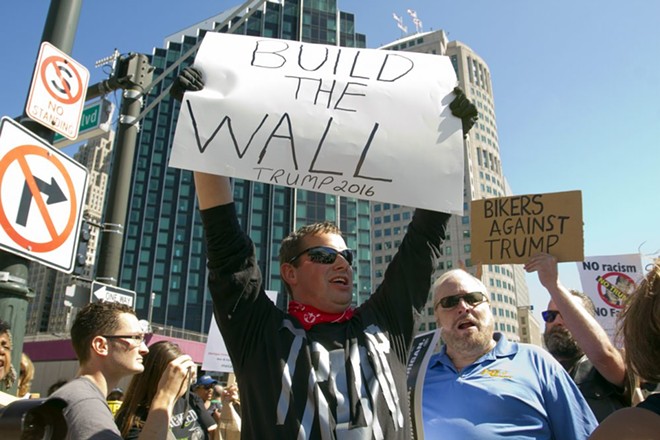 Former White House chief strategist Steve Bannon and a handful of zealous President Trump supporters are hosting a rally at Cobo Center in Detroit on Thursday evening to raise money for a wall along the border of Mexico.

Kolfage, a triple amputee, launched a crowdfunding campaign to raise up to $1 billion to build a wall on private land along the Mexican border.

So far, the GoFundMe campaign has raised $20.6 million.

Right-wing radicals Steve Bannon and Sheriff Clarke coming to Warren for 'We Build the Wall' event
By Devin Culham
News Hits
The second of three town halls is scheduled Tuesday evening in Cincinnati. The first took place on Feb. 8 in Tucson, where fewer than 300 people showed up.

The Detroit event begins at 7 p.m., with doors opening at 5:30 p.m. Counter-protesters are expected to gather outside Cobo Center beginning at 5 p.m.

The rally was originally scheduled for Warren, but for unknown reasons was moved to Detroit.

Tickets are free but registration is required.

Why the two events are held in cities more than 1,000 miles from the Mexican border is unclear.

The group has not provided a timetable for building a wall, nor has it addressed environmental concerns that have prohibited the federal government from erecting a similar barrier.

“We acknowledge that the federal government won’t be able to accept American Citizen donations specifically for the wall anytime soon,” the group says on its website.  “American citizens in the private sector are better equipped than our government to use the donated funds to build an actual wall on the southern border.”

Cobo Center’s name is expected to soon change to TCF Center after city officials raised concerns about the building being named after a racist, former Detroit mayor.