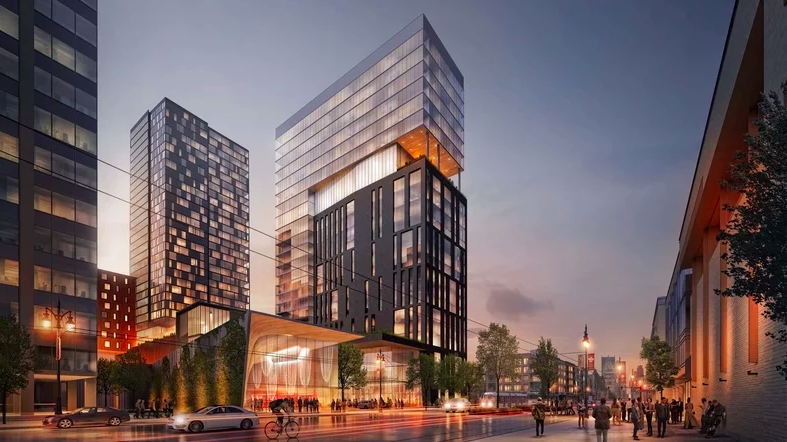 The scene along Woodward Avenue is set to change as two new skyscrapers are taking over an empty lot of land located between Alexandrine Street and Mack Avenue.

Plans for a $310 million development called "the Mid" was announced today and will feature two skyscrapers sitting at 25 stories and 30 stories, respectively, Crain's reports. The first phase of the project is expected to be completed by December 2020.

The 25-story skyscraper located on Woodward Avenue will also boast 220 rooms across 16 floors as part of the luxury Thompson Hotel. The nine upper floors will be modeled into 60 luxury condominiums. The 30-story skyscraper abutting John R Street will feature 250 apartments, parking, and retail.

There are also plans for an additional 12-story building in the complex that will feature co-living housing, according to Crains. Ten floors would be allotted to co-living housing above two floors of retail.

The empty lot of land was sold to 3750 Woodward Ave LLC in September for $15 million after Wayne State University Physicians Group was unable to secure financing for its $68 million medical office and patient facility. The company is registered to Ciena Healthcare president and CEO Mohammad Qazi.