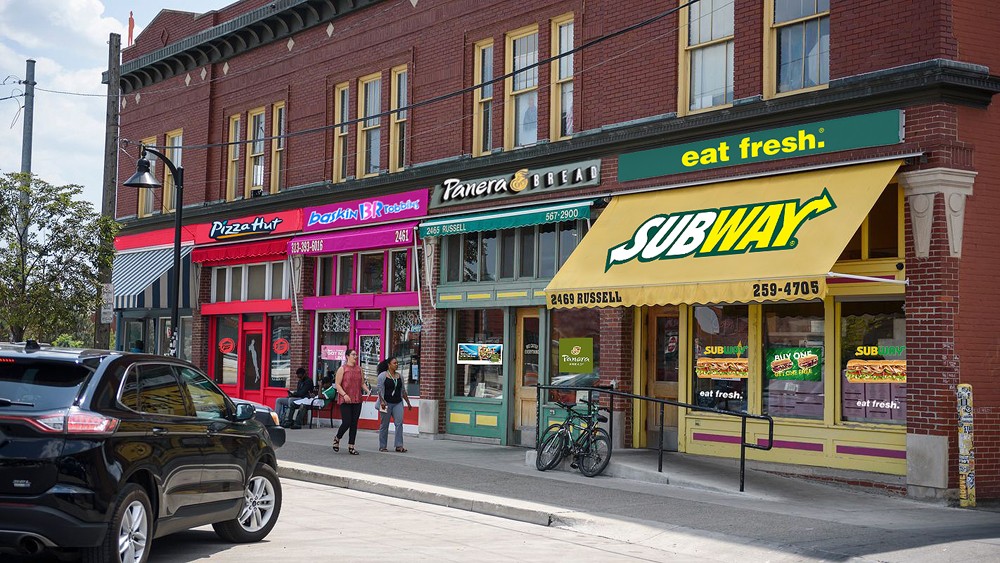 Have you been to Nelsonville? It's in Detroit's Eastern Market — a fiefdom made up of about 20 properties owned by wealthy investor Sanford Nelson.

He and his real estate group purchased them over the last year, and almost immediately reports of longtime residents, artists, and businesses being forced out by steep rent hikes surfaced. Other business owners said they weren't closing shop because of rent increases, but were closing nonetheless. As all this played out, someone or some group hung a banner in the Eastern Market that declared it "Nelsonville."

But Nelsonville isn't unique in Detroit. When Nelson purchased 20 buildings in the market, he joined a growing list of wealthy suburban Detroit businessmen who own high concentrations of property here — property owners who, through land acquisition, have created their own corporate fiefdoms.

Russell Street Deli is closing after wealthy developer buys Eastern Market building
By Tom Perkins
News Hits
And, like the others, Nelson has managed to upset a lot of people in Detroit, but he's accountable to no one. Among other issues, those who establish these fiefdoms often impose their own vision for the neighborhood, no matter how unappealing it may be to those who already live there — especially because that vision usually doesn't include them. The city often lets the wealthy property owners play by different rules, and in some cases the landowners seem to control local politicians. It's also not uncommon for the city and state to give local oligarchs taxpayer money to establish their fiefdom.

Of course, there's nothing wrong with owning a large amount of property, though it often doesn't work out for anyone but the rich. Here are some of Detroit's controversial fiefdoms.

As several Nelson supporters have mentioned in the emotional discussion around his Eastern Market buy-in, he's planning to fix up the approximately 20 buildings he purchased, and gentrification happens — if Nelson wasn't buying these buildings and increasing rent, then someone else likely would.

On the other hand, the Bloomfield Township native used his dad's wealth and connections to buy a large piece of a much-loved neighborhood, then quickly initiate changes that no one asked for. So far eight businesses have closed and more are rumored to be on the way. Those are issues that can upset people.

The Nelsonville outrage peaked with the Russell Street Deli fiasco in which the restaurant closed following a disagreement over a floor repair Nelson said would cost $50,000. He appears to have played dirty with Russell Street by anonymously sending in city health and building department inspectors, though Russell Street owner Ben Hall busted Nelson in the act. He also allegedly tried to push Hall to file a false insurance claim to cover the repair.

Still, there are those who think Nelson is being treated unfairly. Regardless of how one feels, it's objectively true that he now owns a large part of the Eastern Market, and will play a big role in shaping how it looks and feels in the future. He has final say over who's selling food, creating art, opening shop, or living there, and the Russell Street Deli is clear evidence of that. Nelson only began building his fiefdom last year, so it's hard to say what the future holds, and he may deserve more of a chance than he's getting from some. But it's pretty evident that a lot of people so far aren't thrilled with life in Nelsonville.

The Ilitches' District Detroit in the lower Cass Corridor

Perhaps the highest profile fiefdom at the moment is The District Detroit, which is the Ilitch family's marketing term for the area in the lower Cass Corridor, in which the family owns at least 75 properties.

In recent months, everyone from HBO's Bryant Gumble to Crain's to Deadline Detroit to the Free Press, and even conservative Detroit News columnist Nolan Finley — who called The District Detroit "a mirage" — have criticized or questioned the Ilitch family over its failure so far to build The District.

As we and other outlets reported, the Ilitch family quietly bought up properties over about 20 years and left many of them to rot. That drove down property value so it could buy more buildings for cheap. The decay also helped the Ilitch family when it went to state and local politicians to ask for taxpayer money to redevelop the neighborhood.

In 2013 the Ilitch family scored a tax and land deal worth nearly $1 billion on the promise that it would build an exciting district filled with stores, bars, restaurants, homes, offices, nightlife, and more. All that would sprout up around Little Caesars Arena, but most of the promised redevelopment has not yet happened. It took a 2018 Free Press exposé to force the city to cite the Ilitch family for all its blighted buildings. At this point, the Ilitches own nearly every parcel in its fiefdom, but there's nothing there beyond an arena, parking lots, and blight.

At one point, 25 of his 35 Hamtramck properties were vacant storefronts or fenced-in lots that functioned as giant dumpsters collecting trash, garbage, and debris. The grass and weeds grew as tall as six feet, and during winter his sidewalks remained covered in snow and ice. He rarely leased his storefronts to mom-and-pop businesses, even if there was interest, as he said he was holding out for national chains. Since those never arrived, the stores sat empty. That was frustrating to other downtown business owners, who charged that Velleman was a drag on downtown's redevelopment and ultimately detrimental to their livelihoods.

Emails provided to Metro Times showed that the former city manager felt the city shouldn't cite Velleman because he owned the most property downtown. It didn't occur to her that buying a large amount of properties comes with more responsibility, even if you're rich.

Things didn't change until media and public pressure throughout 2016 and 2017 convinced the city to cite Velleman over his code violations and force him to follow the law. In 2019, the lots in the Velleman fiefdom are slightly improved, but still ratty. He shovels his sidewalks and perhaps a few more of his storefronts are leased, though others are still empty and deteriorating.

Since 2010, Dan Gilbert bought and redeveloped about 100 buildings in and around downtown Detroit, many of which were previously underused or derelict. It's been reported that Gilbert owns more of a major city's downtown than anyone in modern American history.

But he's also Detroit's corporate welfare king, and made his fortune in part by peddling shady loans in the city's neighborhoods. That level of ownership grants him alarming influence over city hall — hell, Mayor Mike Duggan even once referred to Dan Gilbert as his boss in response to questions about the tax incentive package Gilbert assembled to attempt to lure Jeff Bezos' second headquarters for Amazon. It's fair to ask why public officials gave Gilbert — a private businessman who's not accountable to taxpayers — authority to decide how to spend hundreds of millions of public dollars. The icing on the cake is that Gilbert stood to profit from the deal, which never happened.

Amazon HQ2 not coming to Detroit; city doesn't make the company's top 20
By Violet Ikonomova
News Hits
There's also the issue of Gilbert's cameras and private security force. Since he owns such a concentration of property, his cameras watch over nearly every foot of downtown. His private security force patrols the area, but Gilbert is essentially the sheriff, so it's not accountable to the public. Beyond that, Gilbert was able to skirt laws that require 20 percent of a building's housing units to be affordable.

That level of ownership also gives Gilbert authority over who lives and works in the area. Guess which group of people seems to be underrepresented in and around the revitalized downtown? In 2019, the Gilbert fiefdom is thriving and he's making decisions that should be left to elected officials who are accountable to residents.

In 2012, the city of Detroit agreed to sell nearly 2,000 parcels to John Hantz, a financial services industry mogul with an estimated net worth of more than $100 million. Hantz proposed clearing the area of vacant homes and planting a tree farm called Hantz Woodlands, or Hantzylvania. The "urban forest," as it was billed, seemed like a nice idea — until one learned the deal's specifics.

The city would sell him the land for the basement bargain price of nearly $600,000, or around eight cents per square foot. The properties are also in and around the Villages, neighborhoods home to some of the city's most valuable land. The deal, which city council approved by a 5-4 vote, happened after the city refused to sell side lots and parcels to individual homeowners and small urban farmers, or asked for a much higher price. It was a clear show of favoritism to a multimillionaire.

Related Times are tough for Detroit's super-rich — but you can help!

Times are tough for Detroit's super-rich — but you can help!
This week offers a chance to donate your labor to one of Detroit's richest men.
By Michael Jackman
News Hits
Moreover, the idea that all the parcels would be covered in a beautiful young forest was not totally true. The land consists of non-contiguous parcels, which means that the lots that don't have trees are likely there for Hantz's speculating pleasure.

Perhaps the strongest indication of Hantz’s intentions came when his properties appeared to be offered for sale on the back of business cards at a recent conference for real estate developers. When a Crain’s reporter got ahold of a card and asked Hantz about it, his team denied that the property was really for sale.

But perhaps the best (and by "best" we mean worst) part of the Hantz Woodlands project — which exists for a multimillionaire to turn a profit on real estate — is that residents actually volunteered to plant trees for Hantz. Metro Times' Michael Jackman noted the absurdity of working for free for a multimillionaire in his 2015 piece, "Help one of Detroit's richest citizens by volunteering!"