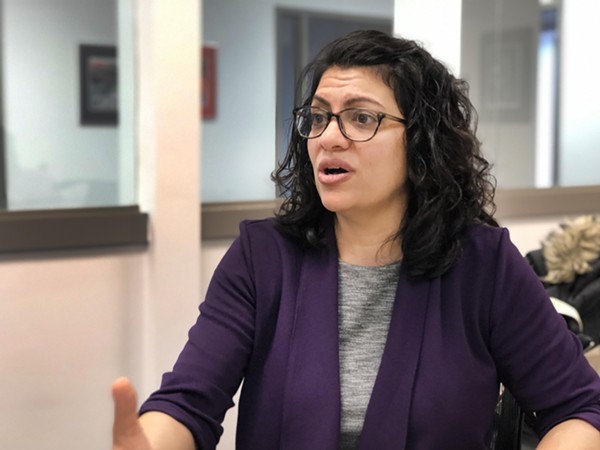 Louisiana Congressman and House Minority Whip Steve Scalise is a guy who once spoke to a white supremacist group that's known for anti-Semitic positions and denying the Holocaust's existence.

Still, Scalise was one of several GOP members of Congress this weekend who were lying about statements Rep. Rashida Tlaib made about Israel in an effort to paint her as anti-Semitic.

In short, the GOP is attempting to give Tlaib the Rep. Ilhan Omar treatment by misrepresenting what she said during a segment on Yahoo's Skullduggery podcast. Only this time, the party is twisting words even further and harder.

Speaking about Palestine, Tlaib made a fairly straightforward comment about how she's glad that her people took in Jews after the Holocaust.

“There’s, you know, there’s a kind of a calming feeling, I always tell folks, when I think of the Holocaust and the tragedy of the Holocaust, and the fact that it was my ancestors—Palestinians—who lost their land and some lost their lives, their livelihood, their human dignity, their existence, in many ways, had been wiped out... I mean, just all of it was in the name of trying to create a safe haven for Jews, post-the Holocaust, post-the tragedy and the horrific persecution of Jews across the world at that time,” Tlaib said.

“I love the fact that it was my ancestors that provided that [safe haven], in many ways,” Tlaib added. “But they did it in a way that took their human dignity away, right? And it was forced on them. And so, when I think about one-state, I think about the fact that, why couldn’t we do it in a better way?”

Pretty hard to twist that into anything anti-Semitic, but Scalise and the GOP are trying. In a statement, Scalise lied, claiming Tlaib said that she is "calmed" by the Holocaust.

“There is no justification for the twisted and disgusting comments made by Rashida Tlaib just days after the annual Day of Holocaust Remembrance,” he wrote in the statement. “More than 6 million Jews were murdered during the Holocaust; there is nothing ‘calming’ about that fact.”

“I call on Speaker Pelosi and Leader Hoyer to finally take action against Representative Tlaib and other members of the Democratic caucus who are spreading vile anti-Semitism,” she said. “All of us, regardless of party, must stand as Americans against the evil of anti-Semitism. If the Democratic leadership continues to stand by in silence, they are enabling the spread of evil.”

On Sunday, Tlaib responded to the criticism.

Policing my words, twisting & turning them to ignite vile attacks on me will not work. All of you who are trying to silence me will fail miserably. I will never allow you to take my words out of context to push your racist and hateful agenda. The truth will always win.


Leaving aside that the GOP only matches its disdain for Muslims with its anti-Semitism, it'll be interesting to see how House Speaker Nancy Pelosi and Democratic leadership handles another attempt to smear a Muslim member of the party. It bungled the Omar fiasco and even joined in on bashing her, and it's worth noting that Pelosi and other Democratic leaders take a whole lot of money from the pro-Israel lobby.

The media by and large is also failing to properly cover the manufactured controversy. It's framing it as "Tlaib stands by Israel and Holocaust comments amid criticism" instead of "The GOP is lying about a Muslim representative's Israel comments." The latter is more accurate.