You are being watched

With little to no public input, the city of Detroit created one of the nation's most pervasive and sophisticated surveillance networks with real-time facial-recognition technology.

"The goal of these surveillance cameras is to make Detroit's residents feel safe going about their daily lives," the researchers wrote for a study titled "America Under Watch." "Adding face surveillance to these cameras risks doing the opposite."

"The city absolutely does not randomly run individuals' images from Project Green Light cameras through facial recognition software as they go about their business," city spokesman John Roach said. "The only time it is used is after a crime is committed and investigators go back through video to pull a still image of a suspect to try and determine his or her identity."

In a letter to the researchers, Craig disputed suggestions that police would "violate the rights of law-abiding citizens" and said the study unfairly depicted the surveillance system as "Orwellian."

The facial-recognition software is tapped into Detroit's controversial Project Green Light, an initiative that began in 2016 with surveillance cameras at late-night locations like gas stations and fast-food restaurants. It has since expanded to include parks, schools, health clinics, hotels, apartments, lower-income housing, and churches. There are now more than 500 Green Light locations.

"Most of us do not expect to be sharing our attendance at a church service or an addiction treatment center with law enforcement," the researchers wrote. "We do not have to be hiding illegal activity to desire privacy in a choice of worship, seek counseling or treatment, or obtain an abortion or other medical service."

In July 2017, the city signed a three-year, $1 million contract with DataWorks, a facial-recognition vendor that offers "real-time video surveillance" and a system that "provides screening and monitoring of live video streams."

Since then, city officials have been largely quiet about the technology. Facial-recognition is not mentioned on Project Green Light's website, and it's unclear whether participants in the program are aware of the technology because it's not mentioned in the application or contract.

Earlier this week, the wide-ranging concerns about facial recognition prompted San Francisco's board of supervisors to ban the use of the technology by city agencies, including the police department.

In 2015, Baltimore used facial-recognition technology to identify people protesting the death of Freddie Gray. Anyone with outstanding warrants was arrested.

The technology can "pick you out from a crowd, identify you, trace your movements across the city with a network of captures capturing your face — all completely in secret," researchers wrote.

But civil rights groups also have sounded the alarm on face-scanning technology, citing studies that show it disproportionately targets African-Americans. The software also is less accurate in matching African-American faces, "increasing the risk of misidentification or investigation of innocent Black people," the study found.

In December 2018, Grand Circus Park, a popular spot for protests and other gatherings, was added to the surveillance network.

Another location that has raised privacy concerns is the Summit Medical Center on West McNichols, which provides an assortment of health services.

"For patients visiting Summit Medical Center to terminate a pregnancy, receive HIV treatment, counseling, or other services, this probably sounds less like a guarantee of safety and more like an invasion into a deeply personal moment in their lives," the researchers wrote.

Not mentioned in the report is that private companies store the data, giving outside vendors access to thousands of hours of surveillance footage.

The Georgetown researchers recommended "a moratorium on the public use of face recognition" until privacy concerns can be adequately addressed. They also encouraged state lawmakers to "adopt common sense legislation to comprehensively regulate law enforcement face regulation." 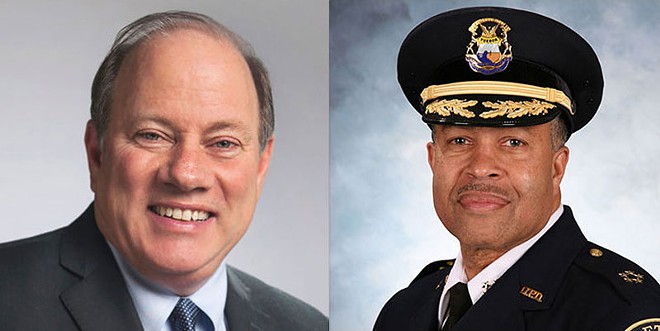 In the letter to researchers, Craig said the city has no plans to abuse the technology.

"If there is a report of a crime or a crime is witnessed by a DPD member, the crime is reported to sworn members to investigate," Craig wrote. "If there is an articulable reasonable suspicion that an individual is observed or reported to have committed a crime, only then is their still image provided for analysis with the Facial Recognition program."

In March, Detroit mayor Mike Duggan announced that police will also tap into hundreds of cameras that are scheduled to be installed at intersections in the next few years.