Yet another person was killed over Cartier sunglasses in Detroit 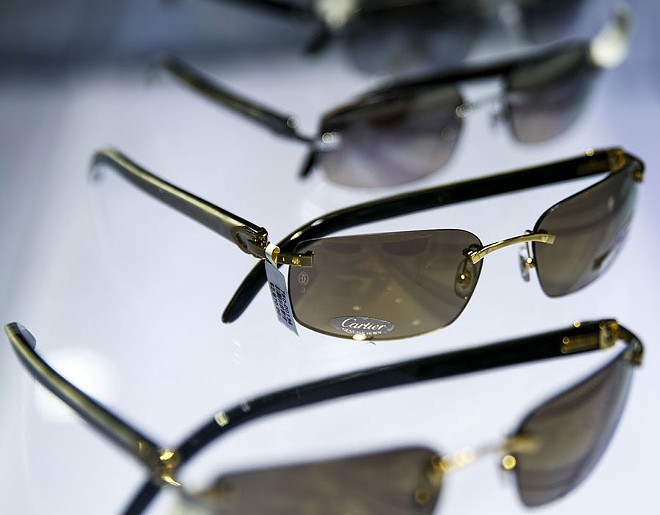 Detroit police are asking for the public to help identify the person who shot and killed a teenager for his Cartier C Décor glasses at a Valero gas station on Detroit's east side on Saturday.


Police released a blurry photo on Monday of the unidentified 18-year-old victim, as well as clearer ones of two people of interest. There is also a nine-second video from the gas station cameras showing a group of men in a red Chevrolet Cobalt — among this group is the suspect.


When the purported shooter got out of the back seat, he was clasping an unknown object in the front pocket of his gray hoodie. The man went inside the gas station, while the people still inside the car held one of the car’s back doors slightly open.


After the group drove away, the car was next caught on film heading westbound on Seven Mile from the area of East Outer Drive, according to The Detroit Free Press.


The alleged shooter, as seen in the video and described by police, is described as a black male between the ages of 20 and 25, about 175 pounds, and with a slim build. He was last seen wearing a gray hoodie with a red numeral 6 on the back and red wording on the front, gray sweatpants, and white shoes, police said. They believe he is armed with a handgun.


Cartier glasses — also known as Carties, Cardis, 'Ye's, or Sticks — were the motive for the shooting, police say. This puts the recent incident among thousands of crimes, shootings, and deaths carried out with the goal of obtaining the glasses, which retail at thousands of dollars a piece.


The link between violence and Cartiers was the subject of a Metro Times cover story last year. The glasses — specifically the models with white frames, which are commonly referred to as “White Buffs” — are a status symbol in the city, and for more than 30 years they have remained a staple of Detroit fashion and culture. Big Sean, among other big names in the hip-hop and rap communities, has become one of the city’s unofficial Cartier ambassadors.


Big Sean said that when he put on his pair of Cartier’s on BET's famed talk show and hip-hop rite of passage 106 & Park, it was a moment he always hoped for because of its meaning to Detroit. However, he said the glasses are a trend that was in place before he began his career — an unwavering symbol of success in a city that would not be characterized in the same way.


"I always said that if I went on 106 & Park, that I would do some shit like that 'cause I knew what that meant to Detroit," he said. "I don't know how it started. I can only tell you how I remember it."


According to the Detroit Police Department, between 2012 and 2016 Cartier glasses figured in nine homicides, 17 non-fatal shootings, and 2,158 robberies.


However, Detroit Police Chief James Craig said last year the nexus of crime and Cartiers does not necessarily indicate a trend, and that it is impossible to glean motive from the numbers provided by his department.


"Prior to my arrival there may have been some instances where Cartier glasses have been one target of a robbery, but I cannot say definitively to you that they are necessarily an object of attack," Craig previously told Metro Times.


While the correlation between the glasses and crime is unofficially recognized by people in the city, many remain undeterred. In an interview with DJ Small, Detroit rapper and Bronco Boyz member says he knows people are killed over the glasses — even fake ones — yet he still wears his.


The glasses with white frames, Snap Dogg said, garner more attention — and thus, more criminal interest — because they are typically more expensive than the black pairs.


“You will die over them glasses,” he said in the interview. “The ‘buffs’ — that’s a serious thing in my city. Especially the white ones.”