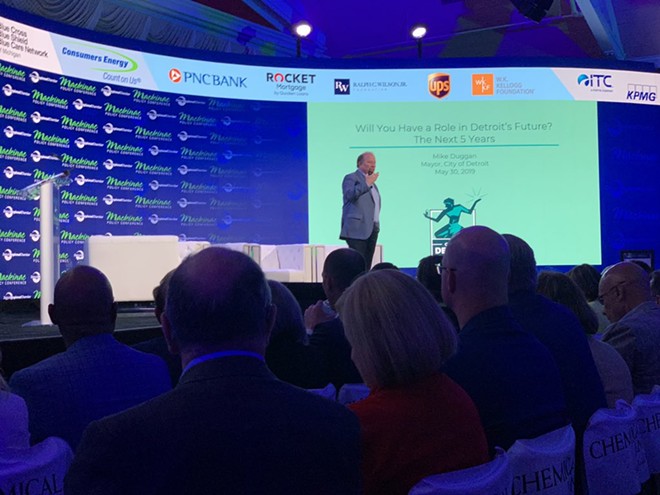 Detroit Mayor Mike Duggan strongly suggested Wednesday that he plans to run for a third term in 2021 as he embarks on an ambitious plan to knock down or renovate every vacant home in the city.

During his keynote address at the Mackinac Policy Conference on Thursday, Duggan laid out his vision for a blight-free Detroit.

The plan hinges on voters approving a $200 million bond to demolish the rest of the city’s 18,000 abandoned and blighted houses and renovate others that are salvageable. That’s how many vacant homes have been razed since Duggan took office in 2014.

"We're going to take down 4,000 houses a year, and in five years by the end of 2024, we will not have a single abandoned house in any neighborhood in the city of Detroit," Duggan said as the large audience of politicians, policy makers, and media applauded.

With five consecutive balanced budgets and reduced debt, Duggan said the bond money is possible without raising taxes. If Detroit City Council approves the bond measure, it could appear on the ballot as early as March 2020, Duggan said. But the money won’t address the thousands of vacant commercial buildings, churches, and schools that are scattered throughout the city.

The blight elimination plan and other long-term goals are why Duggan strongly suggested Wednesday that he’s running for a third term. For the first time since Duggan’s landslide victory for a second term in November 2017, the 60-year-old mayor hinted at his future plans.

“I’ll leave for the people of Detroit to decide whether to rehire me,” Duggan said when asked by the Detroit News whether he plans to “execute those long-term plans.”

“I’m certainly not going anywhere else,” Duggan said. “This will be the last political job I ever do.”

Some political observers have speculated that Duggan is hoping to land a job in Washington, D.C., after he indicated he may help run Joe Biden’s campaign for president. But Duggan said he wants to stay in Detroit.

The mayor's office told the Metro Times that Duggan would stay on as mayor, even if he does help Biden’s campaign.

As of Dec. 31, Duggan had $27,149 in donations for a third-term campaign, according to campaign finance records. Duggan raised millions of dollars for his first two campaigns and won each with relative ease. He still has plenty of time to raise money, and no formidable opponents have publicly expressed interest yet.

Retired Ann Arbor businessman Shri Thanedar, who spent $10.3 million of his own money on a failed run for governor last year, hinted he may run for mayor of Detroit. Some political observers have speculated that Councilwoman Mary Sheffield may also run for mayor.