Student criticizes charter school during her salutatorian speech at graduation 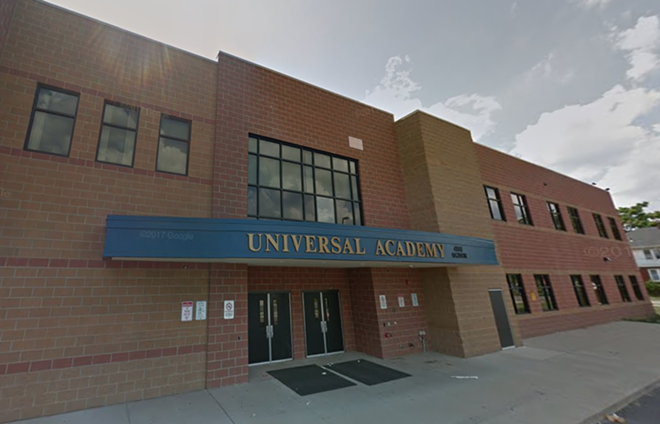 This post has been updated to include a statement from Universal Academy.

A student of Universal Academy, a charter school in Detroit managed by Hamadeh Educational Services, used her graduation speech to call for change in her “unlawful” school before administrators censored her.


Tuhfa Kasem, a 17-year-old from Detroit who graduated salutatorian, alleged Hamadeh Educational Services showed “favoritism and clear biases” toward UA’s sister school, Star Academy. She said she noticed this from the first time she stepped into the school.


Though she said she and her classmates tolerated the school’s treatment, when students would speak out on occasion, they would be shut down.


“Thinking we’d just stay quiet and accept it as first-generation Yemeni and Iraqi students, I can honestly say it’s partially our faults since we’ve tolerated it for a majority of the time. The few times we would speak out we’d quickly be shut down and excuses would be shoved down our throats and we’d be given no option but to accept them,” Kasem said. “I’ll give this administration props for the one thing they’re good at, which is switching the problems back on the students.”


The mic volume was cut during Kasem's speech, but the whole speech was posted in text form below a video that Phil Leslie, one of Kasem's former teachers, posted on YouTube. After the mic was cut, the crowd began yelling to "higher the volume," so Kasem stepped to the front of the stage to continue her speech. Then Nawal Hamadeh — president, superintendent, and CEO of Hamadeh Educational Services, according to her LinkedIn — can be heard saying, "We need someone to escort her," into a microphone, and also noting that it's Ramadan and calling for "respect."

In her speech, Kasem discussed issues she found at the school, claiming them to be “unlawful.” (These accusations were not independently confirmed by MT.) She alleged that long-term substitutes and adults without teaching certifications were teaching classes, and when students complained, Kasem said the school attributed this to the statewide teacher shortage.


Additionally, she pointed out her senior trip being canceled the day before it was supposed to begin with no warning and being denied a graduation outside of the school for more space as issues. She also noted issues with teacher retention and questioned why many certified teachers would leave the school after a few — and sometimes only one — school year.


“The hiring of unqualified teachers on a regular basis and long-term subs who tend to overstay what is deemed legal, trying to trick the system by switching off two teachers every couple of weeks thinking we wouldn’t notice what they’re trying to do under the radar, and when we’d voice our frustrations on the lack of education we’re receiving as students, we’d get quickly shut down with there being a statewide issue with a need for teachers,” Kasem said. “While that may be true, can you give me an explanation on why you can’t seem to keep any of the certified teachers that actually do come to this school? You can’t seem to keep any good teacher that are actually here with good intentions for more than a year, or max couple of years.”

Kasem touched on an incident regarding eight UA teachers being fired mid-year, as previously reported by MT in 2016. The teachers’ termination came one week after five spoke to the Board of Education about lack of resources at the school.

Related Begging for answers: Eight teachers were just fired from a Detroit charter school without cause or notice: While Lansing debates the best plans for Detroit Public Schools, few are paying attention to the turmoil in the charter sector.

Begging for answers: Eight teachers were just fired from a Detroit charter school without cause or notice
While Lansing debates the best plans for Detroit Public Schools, few are paying attention to the turmoil in the charter sector.
By Allie Gross
Local News

Leslie, one of the teachers who was fired and Kasem’s teacher for part of ninth grade, said he specifically found the school to have issues with staffing, discipline, and a lack of resources for English learning programs at the school, which he said has a high population of immigrant and English language learner students.


Though Leslie could not attend the graduation live because it was on school grounds, he said it made him proud to have been her teacher and it aligned with the teachers’ original goal of standing up against injustice when they filed the lawsuit.


“We decided to file the lawsuit as an example. We had taught our students to stand up for what is right, and so when we got fired, we couldn’t just walk away from this,” Leslie says. ”If we know it’s wrong and the students know it’s wrong, we can’t just walk our way. Our last lesson to the students has to be to stand up and speak out when something is wrong — to see her doing that in her speech was pretty amazing. I didn’t know she was going to do that — I heard about it after it happened — so that felt pretty powerful as a teacher.”


Kasem plans to attend Wayne State University next year. While she is no longer a UA student, she wrote in the transcript at the end of the speech that she wanted to use the speech as an opportunity to draw attention to the alleged inequities.


“This nonsense has gone on for way too long and they have tried to silence us many times before, but I thought since I’m graduating this is the perfect opportunity to let out all of the things I’ve endured for far too long,” Kasem wrote. “I am surely not doing this for myself, as I am gladly leaving. This is to make a change for everyone else.”

In a statement to MT, Hamadeh Educational Services spokesman Mario Morrow rejected the claim there has been controversy over the speakers and academic honors in years past, though the school did recognize controversy this year. Morrow said disgruntled adults attempted to “sully” the academic achievements of students by creating controversy and that the speech was an example of this. Morrow also noted the academic achievements of the graduating class. According to the statement, 44 of the 52 graduating students were awarded scholarships, totaling $18,019,821. “The student speech that was reported in negative media coverage, was merely the result of the work of those adults to accomplish their goals. We are so sad to see that some of our students were misled and used to serve agendas that have nothing to do with what really serves their interests,” Morrow said. “Having said that, the negative statements at the graduation ceremony are unfounded. We will continue to work hard for our students and will remain focused on their best interests. We are proud of all of our graduates and would like to wish them the best of luck in their pursuit of their college and career goals. We are confident in their abilities and the opportunities that lay ahead of them.”