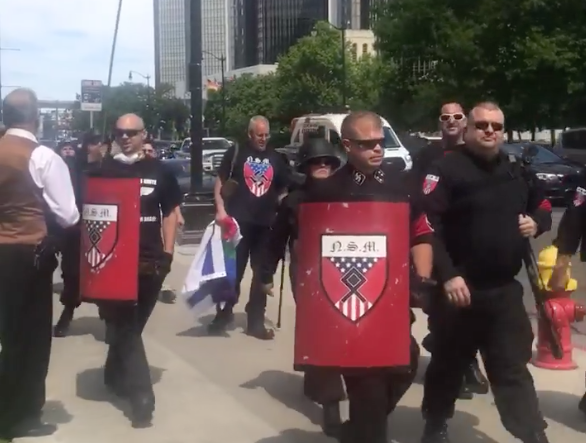 The nation looked on with disbelief and anger as social media lit up with photos and videos of armed neo-Nazis marching in downtown Detroit with what appeared to be police protection during Motor City Pride this weekend.

About a dozen members of the National Socialist Movement (NSM) marched with swastikas and riot shields, tore up a pride flag and hurled slurs at the LGBTQ+ community who gathered at Hart Plaza. One of the neo-Nazis appeared to urinate on an Israeli flag.

Surrounding the neo-Nazis were at least a dozen Detroit police officers, some of whom pushed festival-goers who tried to confront the neo-Nazis. In one video, a person shouts to police, “Why are you protecting them? These are literal Nazis.”

In another video, someone shouts, “Our police should be protecting us.”

Detroit police have not responded yet, but Sgt. Nicole Kirkwood told the Metro Times that a press conference will be held Monday to explain the officers’ actions.

Coverage of the police “protection” was covered by Newsweek and the U.K.-based Independent, but the neo-Nazis' menacing presence was largely ignored by the local media.

A Detroit police sergeant who spoke on condition of anonymity because he is not authorized to talk with the media said the officers were protecting the public by surrounding the armed neo-Nazis. He said police feared the gunmen would open fire if they felt threatened.

Some of the police officers even wore rainbow pins shaped like a heart.

Nevertheless, as the topic trended on social media, people expressed outrage over the police response.

“Maybe I'm wrong, but I always thought the primary purpose of a police presence at public events like Detroit's LGBTQ Pride Festival was to keep the peace and ensure everyone's safety, rather than facilitate efforts by neo-Nazis to intimidate participants and provoke violence,” Donald Koelper tweeted.

Biwa Rabbit tweeted, “They're here, they're armed, and the police are on their side. It's not paranoia, it never was. It's just facts as they stand, glaring, front and center.”

“The police PROTECTED THE NAZIS as they escorted them through the crowds assembled to celebrate LGBT Pride,” tweeted @TheCoffeeSnolf.

Today at Motor City Pride, a friendly LGBT+ event, Detroit PD escorted Nazi's in full uniform outside of the entrance to the festival. Detroit PD bruised those that tried to intervene (see below) and allowed this to happen. pic.twitter.com/lDcbemzhek