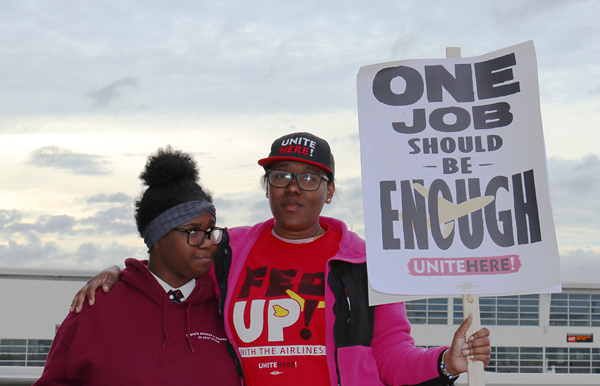 Sometimes Shandolyn Lewis can barely feel her fingers after a grueling, eight-hour shift inside a cooler at Detroit Metro Airport.

The 35-year-old mother is among about 500 catering employees who prepare, pack, and deliver food and drinks at the airport (DTW) for travelers on American Airlines, Delta, and United.

"It's so cold in the cooler you can see your breath," Lewis told the Metro Times. "I'm exhausted and worn out after work."

Among the lowest-paid employees at the airport, Lewis and her coworkers will join about 11,000 airline catering employees in 21 cities across the country voting this month on whether to take a critical first step toward striking when released by the National Mediation Board. The action by Unite Here, which represents a majority of the nation's airline catering workers, is aimed at improving what the union describes as low wages, exhausting and dangerous work conditions, and expensive health care plans.

DTW's food workers, who are employed by Sky Chefs, are voting from 6 a.m to 9 p.m. Thursday.

Locally, three-quarters of the catering employees make less than $15 an hour. More than half of the employees don't have company health insurance.

For Lewis to afford the company's $100-a-week health plan, she works at a second job for 16 hours a week.

"I just want better wages so I can spend more time with my family," says Lewis, whose daughter Ariana is 12 years old. "The airlines are making billionaires of dollars off our backs. We work really hard to do our best to make the customer happy. We deserve a little bit more money."

Caterers and other airline workers are covered by the Railway Labor Act, which prevents them from striking without permission from the National Mediation Board. Thursday's votes would authorize a strike if the board provides permission to do so.

Unite Here International President D. Taylor said it's time for the industry to pay caterers what they deserve.

"The airlines are making record profits, on the backs of deeply exploited kitchen workers who are forced to choose between paying their bills, relying on government assistance, or even forfeiting medical care even while working overtime," Taylor said. "We refuse to allow this to happen."