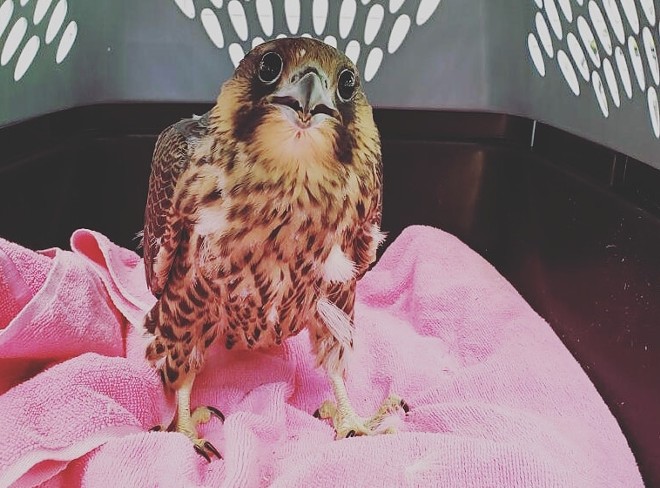 A peregrine falcon chick is recovering from a concussion after Wayne State University police rescued him from a grassy median at a busy intersection last week.

Police were responding to a call about a big bird near the intersection of Cass and Warren in Midtown when two officers spotted the injured chick Wednesday night.

“As we got closer, we could see blood close to the beak,” Officer Matt Roznowski tells the Metro Times.

He and his partner Asaad Fradi gingerly placed the chick in a padded bag and took him back to the police station.

“I have a big heart for animals,” Roznowski says.

The male chick is now in the good hands of Department of Natural Resources volunteer and falcon expert Dave Hogan.

“He had a little bit of a concussion,” says Danielle Durham, a DNR nesting coordinator. “He’s doing OK.”

Once he’s healthy, the chick will be returned to Old Main to reunite with his parents and brother and sister.

The falcon is one of three chicks that hatched on a ledge at Old Main in May.

Their parents, Isabella and Freedom, have lived on the historic building for at least three years and have become stars of a live webcam near the nesting site, as well as their own Instagram, @WSUFalcons.

Once an endangered species because of pesticides, peregrine falcons have bounced back, especially in urban areas, where they like to perch on buildings. Peregrines have lived in both downtown Detroit and Mt. Clemens.