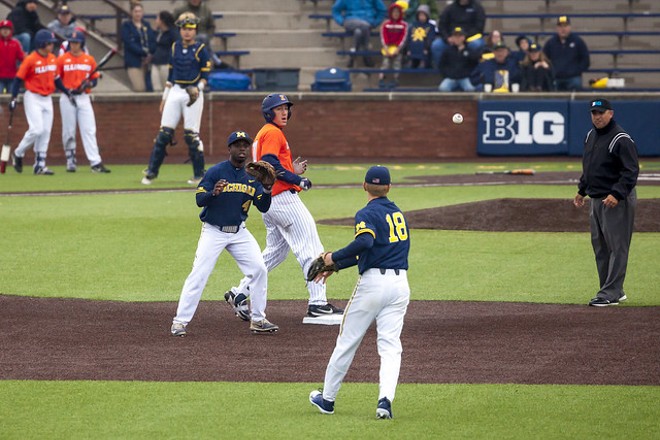 While college baseball teams are almost entirely made up of white players, the University of Michigan made it a point to seek out racial diversity — and the team is now playing in the College World Series championship.

“We just think our roster should look like the United States of America,” U of M coach Erik Bakich said on ESPN’s telecast, according to The Washington Post. “We target a lot of inner-city kids. There’s a lot of great athletes out there. I think it’s ridiculous, the cost of travel ball and some of these showcases. It negates opportunities for a lot of kids.”


Michigan has seven Black players on its roster, and it starts four of them. The team is an anomaly when compared to a majority of other college teams: According to the NCAA Demographics Database, in 2018, only 6 percent of Division I players were Black, and only 4 percent of coaches were Black. A lack of diversity in baseball also persists at historically Black colleges and universities, according to the Post, where baseball programs can get dropped or fail to start African-American players.

“It’s a lot of digging. It’s a lot of travel. It’s a lot of time invested by our staff to find these types of players,” Bakich said in an interview with the Post. “We don’t limit ourselves to the mainstream tournaments and [recruiting] showcases that everybody seems to go to. We try to be as exhaustive in our search as possibly we can.”

Baseball presents barriers to entry because it involves equipment costs as well as access to large fields to practice in. Additional fees faced include those necessary to attend scouting events and travel games; without the means to pay for these factors up front, attaining a college scholarship to play the sport can feel frustratingly out of reach.

U of M, however, has been intentionally and purposefully recruiting minority players by paying attention to the Amateur City Elite program, as well as regional prospect development events held by the MLB. The team beat Texas Tech on Friday with a 15-3 win, and will face off with Vanderbilt in the finals on Monday.

His team has built a pipeline from the Amateur City Elite program sponsored by the Chicago White Sox and MLB’s regional prospect development events. Now Michigan will play for a national championship after Friday’s 15-3 win over Texas Tech. The Wolverines are set to meet Vanderbilt — which also has seven Black players on its roster — in Monday’s College World Series finals.

Michigan has not played in a College world series since 1984, and it hasn’t played for a national championship since 1962.