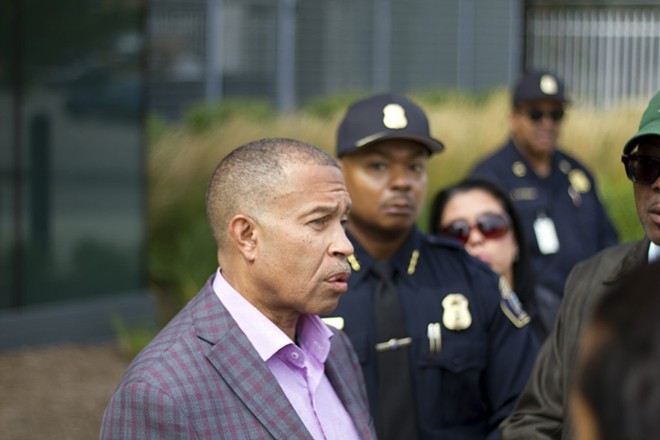 Detroit Police Chief James Craig finally broke his silence Thursday about the city secretly using facial-recognition technology for the past two years, castigating the media for asking questions about privacy rights and flaws in the system.

Condescending and irritated, the chief showed little concern about the serious constitutional issues that have been raised by legal experts and the unreliability of the evolving technology, especially when used on people of color.

When asked how the police department balances privacy rights with solving crimes, the chief defensively responded, "How come we never talk about the criminals?"

The nearly one-hour press conference came hours before the Board of Police Commissioners plans to approve expanding the facial-recognition technology to cameras being installed at intersections. Police Commissioner Willie Burton, one of the few opponents of the technology, has called for a public hearing to gather input before using a technology that some cities are banning. A majority of the commission declined to hold a hearing.

Craig said the department will detain people solely based on the technology because it constitutes "reasonable suspicion" that someone committed a crime. The chief said he doesn't know how many false matches were made in Detroit and could only say that "several" people have been arrested because of the technology.

When Craig was asked about concerns of over-policing, he responded, "Let's talk to members of communities with violent crime."

"This is about keeping people who live, work, and play in Detroit safe," Craig said.

Mayor Mike Duggan, who is also behind the technology, has declined to comment, distancing himself from the controversy.

Without public hearings or announcements, the Detroit Police Department integrated the facial-recognition technology with the city's Project Green Light, an initiative that began in 2016 with surveillance cameras at late-night locations like gas stations and fast-food restaurants. It has since expanded to include parks, schools, health clinics, hotels, apartments, lower-income housing, and churches. There are now more than 500 Green Light locations.

Live updates from Thursday's meeting will be tweeted.

Detroit Police James Craig is really defensive right now, incensed that anyone would have a problem with pervasive facial recognition technology. He insists it's constitutional. Experts disagree.