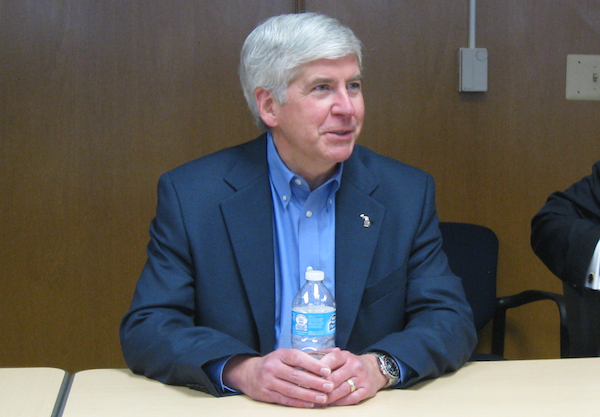 Turns out former Gov. Rick Snyder will not be taking up a research fellowship at Harvard University after all.

Snyder took to Twitter on Wednesday to announce he was turning the fellowship down after it drew backlash on social media. People were upset that Harvard chose Snyder, who oversaw the Flint water crisis, which poisoned tens of thousands of people with lead. Apparently to Harvard, this was an interesting résumé line item. In its initial announcement of the fellowship, Taubman Center director Jeffrey Liebman cited Snyder's "significant expertise in management, public policy, and promoting civility."

There's that word: "civility." Snyder also cited it in his announcement of the resignation from the fellowship.

"It would have been exciting to share my experiences, both positive and negative; our current political environment and its lack of civility makes this too disruptive," Snyder tweeted. "I wish them the best."

I have informed the HKennedy Sch that I am turning down its offer as Snr Res Fellow. It would have been exciting to share my experiences, both positive and negative; our current political environment and its lack of civility makes this too disruptive. I wish them the best.


The "One Tough Nerd" governor has long railed against what he calls a lack of "civility." As governor, his slogan was "relentless positive action." On his way out the door, he published an "open letter regarding civility in public discourse" in The Detroit News at a time when Trump administration officials were getting publicly shamed and shunned.

Snyder certainly has an interesting idea of what "civility" means, though. When Michigan voters rejected his emergency manager law at the ballot in 2012, he proceeded with a new version that couldn't be rejected by voters because it was attached to a funding bill, which made it immune to a referendum. Was that "civil?" Sure, we guess, technically. But you can draw a straight line from the emergency manager law to the Flint water crisis. Who can blame Michigan voters for being mad at Snyder for his indifference to their will?

Doug Elmendorf, dean of the Harvard Kennedy School, confirmed to The Hill that Snyder resigned from the fellowship.

"I believe the Kennedy School needs to study both failures and successes of government, and we anticipated that students would have learned from engaging with and questioning Governor Snyder about his consequential role in decisions regarding Flint and many other issues during his eight years in office," Elmendorf told The Hill. "We appreciate Governor Snyder’s interest in participating in such discussions in our community, but we and he now believe that having him on campus would not enhance education here in the ways we intended."