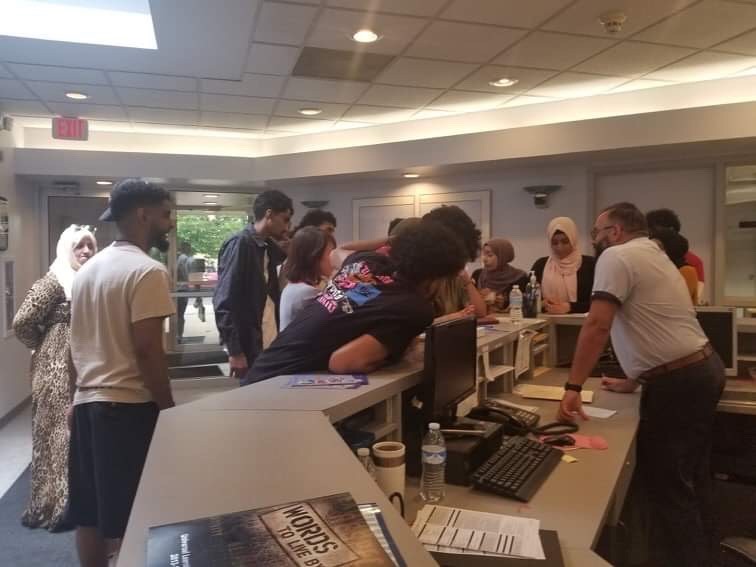 Former students, alumni, and parents of Universal Academy — the Detroit charter school that made headlines last month after the salutatorian blasted school leadership during her graduation speech — convened outside the building of Hamadeh Educational Services, the charter school system overseeing UA, on Friday afternoon because their transcripts had not been released.


The people in front of the building — as seen in a Facebook live video posted by former student America Yahya — conversed with a police officer, who arrived at the scene and said he was called by people inside the building. Students said they were there peacefully and only wanted answers about when they would receive their transcripts, but the officer said the transcripts would be mailed out the following week.


“A few students spoke out at their graduation about some of the issues that were happening at the school,” a parent said in the video. “What it feels like — as an adult — it feels like this is a retaliation, like, ‘We’re punishing you.’”


UA students graduated on May 30, though they still have not received their transcripts. Most colleges require college transcripts to finalize scholarship offers and enrollment, and UA students in the video said this was their main reasoning for coming to the building.


But when they showed up, the door was locked. Students say there were people taking videos of the students through the glass, which prompted them to begin filming themselves.


“They weren’t going to hear us civilly, so we decided to show it to the whole world,” Yahya tells MT. “We’re just kids trying to get into college and get our transcripts … and these people aren’t trying to help us whatsoever.”


This comes one month after 17-year-old Tuhfa Kasem, one of UA’s salutatorians, made local news for her negative remarks about UA and Hamadeh during her graduation speech. Kasem was present on Friday.


In her speech, Kasem discussed issues she noticed at the school, alleging them to be “unlawful.” She said long-term substitutes and adults without teaching certifications were teaching classes, and when students complained, Kasem said the school attributed this to the statewide teacher shortage.


Additionally, she pointed out her senior trip was canceled the day before it was supposed to begin with no warning and being denied a graduation ceremony outside of the school for more space as issues. She also noted issues with teacher retention and questioned why many certified teachers would leave the school after a few — and sometimes only one — school year.


Hamadeh Educational Services spokesman Mario Morrow denied Kasem’s claims in a previous statement to MT. Morrow said no students would be denied transcripts and the company said it has hired a lawyer to look into the speeches, according to Chalkbeat Detroit.


Morrow told Chalkbeat Detroit the timing was because of low staffing at the end of the school year and that it was not connected to the graduation speeches. He tells MT all transcripts are being released Tuesday, but did not comment on the other issues raised by students.

Students, like recent UA graduate Sarah Nasher, tell MT they questioned if the delay was connected to an investigation launched after the speeches by Kasem and co-salutatorian Zainab Altalaqani at graduation. This would make sense, Nasher says, because graduates at the other schools run by Hamedah already received their transcripts.


“After Tuhfa and Zainab used their First Amendment right to speak out, we had no real answers as to when we’d get our transcripts,” Nasher says. “We needed proof that we graduated.”


Kasem’s speech touched on an incident regarding the firing of eight UA teachers in the middle of the school year. The teachers’ termination came one week after a handful of staff members spoke to the Board of Education about a lack of resources at the school.


“They were told through email they were terminated even though their contracts weren’t finished,” Yahya says. “After that, we gained more media coverage, more teachers spoke up, and the teachers took Hamadeh Educational Services to court.”


Ultimately, Yahya says they will keep pushing to make positive change in the school for future generations while they await a resolution from Hamadeh administrators about their transcripts. She and the four other students interviewed by MT called Hamadeh’s actions a “pattern of lies.”


“We’re not going to stop once we finally get our transcripts,” Yahya says. “It’s about making things better for the students — what Hamadeh Educational Services claims to do.”