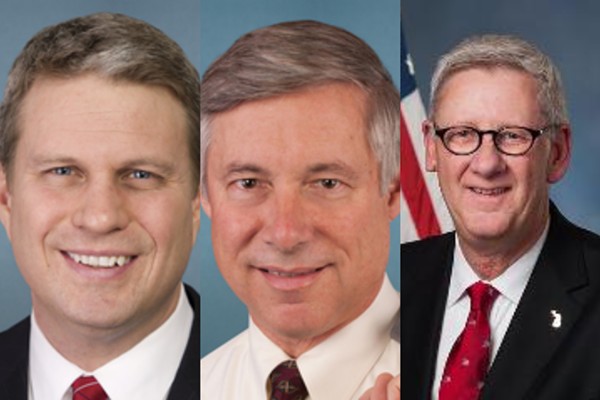 Half of Michigan's Republican congressmen spoke out against President Donald Trump’s racists tweets over the weekend.

Reps. Fred Upton, Paul Mitchell, and Bill Huizenga criticized Trump on Monday for suggesting four Democratic congresswomen of color should "go back" to their own countries. One of those lawmakers is Rashida Tlaib, who was born in Detroit.

Upton, who represents the 6th District, tweeted that Trump's "tweets were flat out wrong and uncalled for."

"Frankly I’m appalled by the President's tweets," Upton tweeted. “There’s no excuse. Inflammatory rhetoric from both sides of the aisle that is used to divide us just isn’t right. It’s not helpful.”

Huizenga, of the 2nd District, said he "strongly" disagrees with Trump’s remarks.

"Every duly elected official needs to lead by example, end the personal character assassination attacks, and focus on finding ways to work together to make America the very best it can be," Huizenga tweeted. "We are better than this, let’s start showing it."

Mitchell, of the 10th District, was more tepid in his response.

"We must be better than comments like these," he tweeted. “I share the political frustrations with some members of the other party, but these comments are beneath leaders.”

As of Monday afternoon, the Michigan Republican congressmen who did not respond to Trump’s tirade were Reps. Jack Bergman, John Moolenaar, and Tim Walberg. They may soon be forced to take a position because House Speaker Nancy Pelosi is calling on a vote to condemn Trump’s tweets.

All five of Michigan’s Democratic members of Congress spoke out against Trump. So did U.S. Rep. Justin Amash, who recently left the Republican Party and is now an independent.

"To tell these American citizens (most of whom were born here) to 'go back' to the 'crime infested places from which they came' is racist and disgusting," Amash tweeted.

The Michigan Republican Party, which has stood behind Trump in even the roughest of times, declined to comment and has not responded publicly.

By contrast, the Michigan Democratic Party released a strong statement condemning the president.

"The four U.S. congresswomen attacked by the president in his racist remarks, including Michigan’s Rashida Tlaib, are patriots who are fighting for a more perfect union for all Americans,” MDP Chairwoman Lavora Barnes said. "Americans do not deserve to have a leader that is a bigot, who promotes policies to destroy immigrants' lives, devalue women’s voices, and discriminate against communities of color. Republicans continue to allow the desecration of our nation’s values in their name, but history will not treat the silence of cowards with kindness — and neither will voters."

Here are what some of Michigan's Democrats in Congress said:

This is xenophobic. Of all the tweets, this is the worst one yet.

We should call this what it is: hate.

We can never forget it’s our diversity that makes us strong. There is no place for this kind of talk in our country. https://t.co/CF2YjXAHRS


Telling a group of American women of color to go back to their country is fundamentally un-American.

That the President of the United States is making such comments toward sitting members of Congress is racist and hateful. https://t.co/ZWCwtJHLpt


We should all be very concerned by tweets in this thread. Divisive rhetoric will NEVER “Make America Great Again” 🤨 https://t.co/QPmcKb4ICg