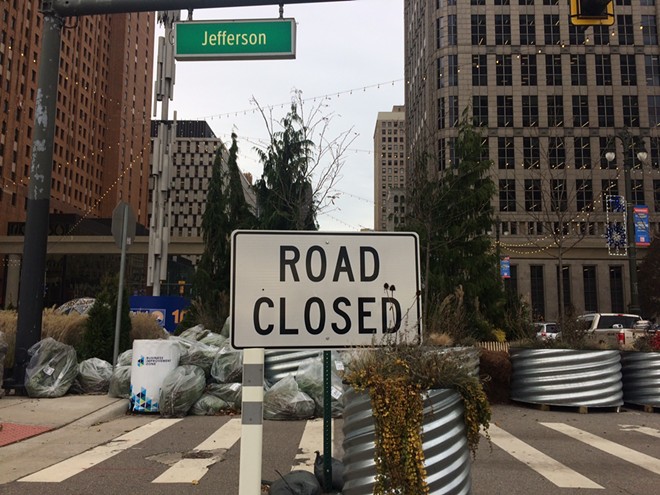 The plaza — which has closed off a section of Woodward Avenue between Jefferson Avenue and Larned Street since 2017 — will be removed, and roads will reopen for automotive traffic in November.

The 4-4 vote, which failed to pass the administration's proposal, came after council members cited traffic and safety worries.

According to The Detroit News, council president Brenda Jones expressed concern over the impact of the pedestrian gathering space on the heavily trafficked intersection. Council president pro tem Mary Sheffield told the News that she voted against the plan because it called for the removal of the median, something she wasn't prepared to agree to without a longer-term study. "I like it, I enjoy it," she said. "I’m just not sold on it being a permanent place here in the city of Detroit."

Council member Raquel Castaneda-Lopez was among those who’d been in favor of keeping the plaza. The space, she told The Detroit News, is one of the few that’s free to the public and it “removes barriers on equity” and is “welcoming to longtime residents.”

“That’s not always the atmosphere in some other spaces downtown,” she said.

The fate of the plaza had been uncertain since its opening, when some council members critiqued the city’s planning and department of public works for putting up the gathering space and causing road closures in one of the city's busiest intersections without the body’s approval.

Since then, the administration has needed to continually request approval from city council to extend the road closures. On Tuesday, however, council members failed to approve another five-year extension.

The city was also seeking approval to spend $800,000 on the plaza for a stage, eating area, and playground.

Those who voted against the proposal were Jones, Sheffield, Roy McCalister, and Janeé Ayers.

The city's legislative body has until 4 p.m. on Monday to reconsider its vote.

Meanwhile, in Midtown, Woodward Avenue could be narrowed as part of plans for a new “Detroit Square,” a $75 million-plus project that would transform the cultural district into a grassy campus linking institutions like the Detroit Institute of Arts, Wayne State University, the College for Creative Studies, the Detroit Public Library, and the Charles H. Wright Museum of African American History.