Another Mich. GOP congressman has bailed because of Trump 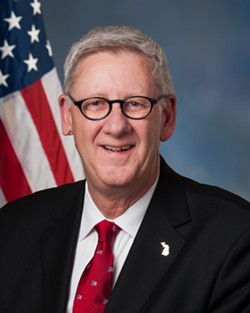 Rep. Paul Mitchell is the latest Michigan Republican congressman in recent months to have bailed on the congressional GOP because of President Donald Trump.

The second-term Republican, whose district includes much of Macomb County, announced on Wednesday that he will not run for re-election — surprising news considering it is only months after he won re-election and his district is not at political risk.

The news comes just days after Mitchell condemned Trump for his racist tweets, in which Trump told four congresswomen of color, including Detroit's Rashida Tlaib and Minnesota Rep. Ilhan Omar, to "go back" to their own countries. All are American citizens.

.@RealDonaldTrump, we must be better than comments like these. I share the political frustrations with some members of the other party, but these comments are beneath leaders. https://t.co/4b8e5hlSZI


Later, after Trump followers at a rally began chanting "send her back" in reference to Omar, Mitchell had reportedly requested a meeting with Trump to discuss the issue.

“I want to talk to the president about the tweet, and what has emanated from that,” the Michigan Republican told Politico. “It’s one thing to do chants of ‘lock her up.’ But a chant like [‘send her back’] is simply not reflective of our Constitution.”

Regarding his decision not to seek re-election, Mitchell told Politico he was frustrated with Congress and the party:

"You look at the rhetoric and vitriol, it overwhelms policy, politics becomes the norm," he said. "Everything’s about politics. Everything’s about an election. And at some point of time, that’s not why I came here."

He decried a lack of leadership in the GOP.

“The problem is it trickles down to our constituents, where they think it’s OK," he said. "And they think this way the world should be. I think leaders have to lead. They have to stand up, and they have to demonstrate what we should expect of each other in our country. I was commenting earlier to our senior staff, ‘Do we see the next four [years], in the near term, the better angels coming out of this?’”

Mitchell told Politico that he wants to spend more time with his family, including a 9-year-old son with special needs.

“I'm having my schedule controlled by an entity that doesn’t care about schedules because there are too many people in this town that their entire life is revolved on being a member of Congress," he said. "Hell, I have a newsflash for them: There’s more in life. There’s a whole world out there outside this city that’s a pretty damn nice place."

Trump's racist rants thrust Michigan Republicans in awkward position
By Steve Neavling
Local News
Earlier this month, Michigan Rep. Justin Amash, who represents the Grand Rapids area, announced in an op-ed published in The Washington Post that he was leaving the Republican Party, citing a "partisan death spiral." He is now an independent.

Although he did not mention Trump by name, Amash blasted the two-party system, which he says has become bound by loyalty to party over duty to the American people or the Constitution.

"The parties value winning for its own sake, and at whatever cost," he wrote. "Instead of acting as an independent branch of government and serving as a check on the executive branch, congressional leaders of both parties expect the House and Senate to act in obedience or opposition to the president and their colleagues on a partisan basis."