Bipartisan panel: Why Detroit's facial recognition technology should be banned

by Steve Neavling and Alex Harring 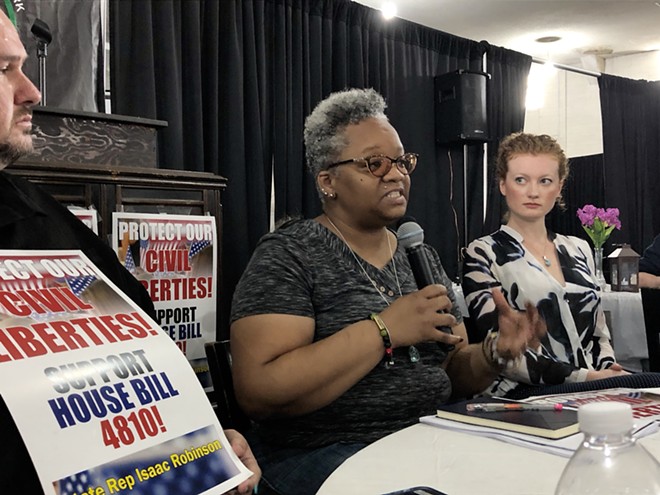 About 30 people turned out to the meeting, which was hosted by state Rep. Isaac Robinson, D-Detroit, who introduced a bill earlier this month to impose a five-year moratorium on the technology.

“This technology violates our civil liberties,” Robinson said at King Solomon Baptist Church on Detroit's west side. “Today, we are taking a stand for the Bill of Rights.”

Detroit's facial recognition software has come under intense scrutiny after Georgetown Law’s Center on Privacy & Technology published an alarming study in May that featured the city's face-scanning system and expanding surveillance network. Until then, police had been using facial recognition technology for nearly two years without public input or a policy approved by the Detroit Board of Police Commissioners.

“It collects very sensitive information about who we are as a person: whether I was in an HIV clinic, whether I go to this church versus that church, where I can have kids in daycare, where I vote. We have a right to privacy,” Garvie said. “The concern here is by connecting face surveillance to cameras that are not just all over the city but in particular on sensitive locations. … This risks the very rights the Supreme Court said fall under our Fourth Amendment right to privacy.”

Police Chief James Craig insisted last week that he had no idea the technology would be controversial. DPD's facial recognition policy was never approved by the city's Board of Police Commissioners as required by the charter.

“If we knew then what we know now, we would have gone before the commission,” Craig told reporters.

The police commission has been working with Craig's administration in adopting a facial recognition policy that restricts how and when it's used.

But Detroit Councilwoman Mary Sheffield is proposing a ban on the technology in Detroit. Congress also is considering imposing a moratorium.

Some of the most passionate opponents of facial recognition systems are civil rights advocates, who cite research that shows the technology is most unreliable when analyzing people with darker skin.

“I have to prioritize race in this discussion, personally, because I am in a city that has close to 700,000 Black people,” said Tawana Petty, data justice director of the Detroit Community Technology Project, which explores issues ranging from digital privacy to racial inequality. “This technology does not accurately identify us. So to have a city government and DPD leadership pushing forward with the technology over a demographic that has tens of thousands of Black community members who can be misidentified with this technology is very detrimental to our livelihood and to our safety.”