Detroiters march for a Green New Deal ahead of Dem debates 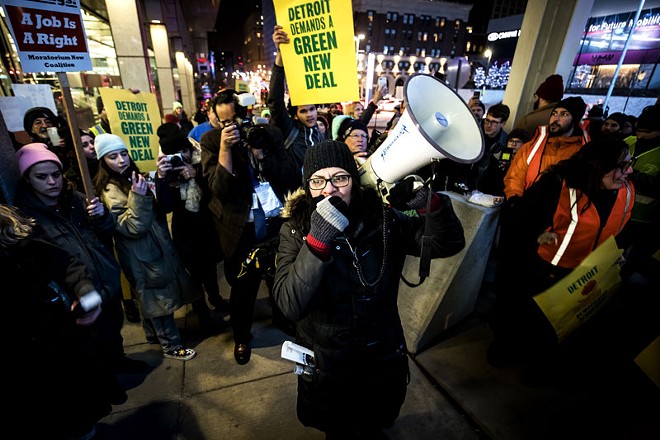 A group of Detroiters and activists with Frontline Detroit will march in the streets today to demand that the Green New Deal be at the center of the Democratic debate.

The Green New Deal is a progressive proposal that seeks to address the climate crisis and economic inequality by transforming the economy from one reliant on fossil fuels to one built around clean energy. A resolution floated in the U.S. House earlier this year stated the Green New Deal's goals and called for a 10-year national mobilization to meet them.

Among other general proposals, it calls for the U.S. to meet 100 percent of its power demands with clean energy sources, and calls for a guarantee of a job with a family-sustaining wage; adequate family and medical leave; paid vacations; and retirement security.

No, the proposal doesn't call for the elimination of air travel or an end to meat consumption, as Trump likes to claim.

The Green New Deal concept is being pushed by progressive leaders like Bernie Sanders, Rashida Tlaib, and New York congresswoman Alexandria Ocasio-Cortez, while many of the Democratic presidential candidates have expressed support for it.

The local supporters will gather in Cass Park at 4 p.m. and march to the Fox Theatre at 5:30 p.m. to voice their demands for a Green New Deal for Detroit, then return to Cass Park.

Organizers said in an email the demands that will be delivered include:

—We have a right to clean air, land, water, food, energy, jobs, no more sacrifice zones.

"If you want to be the president of the richest, most power, most industrialized nation on earth, you have to accept basic moral obligations, you must come to grips with problems of corporatized industrialization and the need to correct those problems. You must embrace environmental justice here at home and on a global scale. Anyone vying for that office must come to grips with our right to clean, air, land, water, and food. Frontline communities like Detroit and Flint battling for clean air, safe, affordable water, and the general right to health will no longer be sacrifice zones that bear the brunt of industrial pollution and mismanagement. It will not do to simply move the pollution and poisons out of our communities, we need to eliminate them, we need a major shift in the way we get energy and make things."

"The Green New Deal addresses deep concerns and needs when it comes to justice for Detroit. We Detroiters have worked hard to protect ourselves from greedy corporations that siphon off public tax money, land, and other resources for private money-making projects. We were the first city in the nation to pass a city-wide community benefits agreement, even though it was severely weakened by a big money corporate campaign. These corporations already don’t pay their fair share of taxes, which drags down the infrastructure. We need public services that are necessary for a real, workable democracy."

—Detroit: Engine of the Green New Deal — Detroit can once again be a mostly middle class city.

"Anyone that wants to be president of the United States needs to be concerned with the right of workers to organize, and how organized workers build and support communities. That is the legacy of Detroit that we must reclaim and modernize to fit these troubled times. We can help stave off the worst of the climate crisis by building the solar panels, wind turbines, and energy storage batteries we will need to survive."