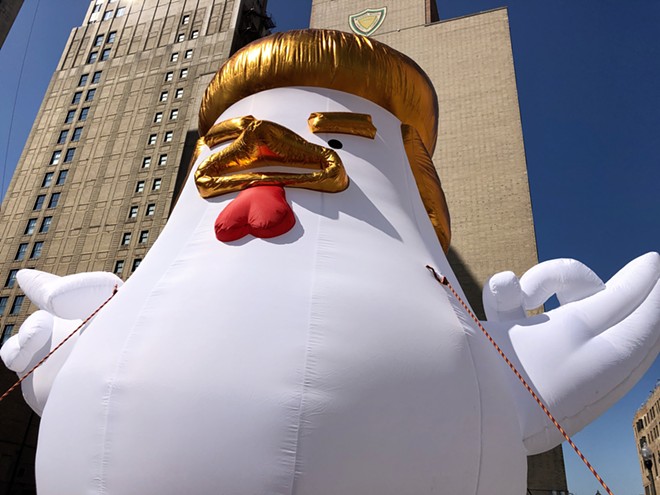 The nation’s eyes are on Detroit this week as 20 Democrats prepare to square off in the first of two presidential debates Tuesday evening.

The national media already set the stage with narratives about the city’s so-called “rebound” and the importance of attracting Black votes.

Detroit’s suburban neighbor, Macomb County, also has been spotlighted for its reputation as the home of the “Reagan Democrats.” The county, which usually supports Democrats, flipped for Donald Trump in 2016 like it did for Reagan in the 1980s.

Outside the Fox Theatre, where the first debate begins at 9 p.m., protesters and activists began trickling in late Tuesday morning. Along Woodward, a lone anti-abortion protester covered in fake blood clutched a sign that read, “Abortion is Murder.”

Media trucks with satellites were parked in front of Comerica Park, and talking heads babbled.

The most visible sign of the debates was a large inflated chicken with a Trump head. It was erected by the nonprofit Tax March, a group that advocates for increasing taxes on the super rich and taking off the burden of lower- and middle-income people. Activists handed out “Tax the Rich” shirts, tote bags, and buttons.

Tlaib blasted the more than $150 million in taxes that financed Little Caesars Arena and said that investment won’t “trickle down” to the neighborhoods, where more than half of the children live in poverty.

“I’m so tired of them scamming us, gaslighting us to believe that when we build stadiums … that it’s somehow going to trickle down to us,” Tlaib said. “It doesn’t come to the people. It never will. And we all know it because corporate greed is a disease, and we have to push back against it.”

U.S. Rep. @RashidaTlaib blasted the use of more than $150 million in taxes to build the Little Caesars Arena. “Corporate greed is a disease,” she said before tonight’s Democratic Presidential Debate. pic.twitter.com/S78q6t0jJx

“We are frustrated, and we are going to change this country right here in Michigan,” Brown said to loud applause.