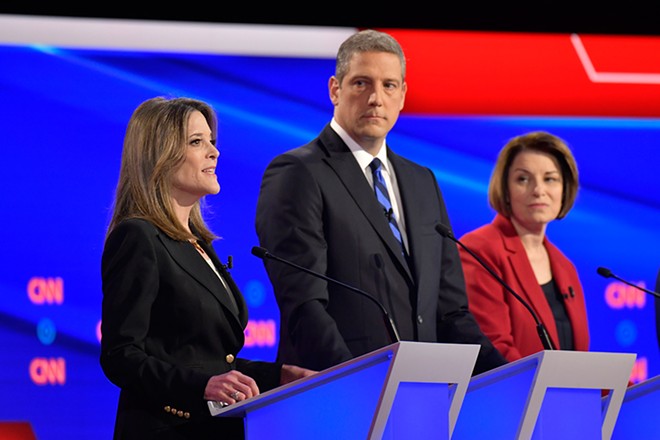 With the nation's eyes turned to Detroit as night one of the second round of Democratic debates commenced Tuesday at the Fox Theatre, the American people appear to have once again become entranced by love and light. Has author, self-help superstar, spiritual advisor to Oprah, and presidential hopeful Marianne Williamson put a hex on us? Or is it “So Long, Marianne”?

As per her debate debut last month, Williamson, who was the most Googled candidate in Michigan following the June debate, invoked a similar strategy during Tuesday night's showdown: remain virtually silent until addressed by the CNN moderators, and, when she does speak, go straight for the jugular. (Or is it the heart?)

Surprisingly, Williamson's Tuesday night performance yielded an even more impressive result, as she was the most Googled candidate in the country following the debate.

Marianne Williamson, the former minister of a metro Detroit church, was the most searched presidential candidate on Google during tonight's #DemDebate in Detroit. https://t.co/8MmJ7g1qXz pic.twitter.com/7WTGnVb6kZ


That's right: The Washington outsider with an indiscernible accent (somewhere between Saturday Night Live's Kate McKinnon if she was to take on Katharine Hepburn) who currently offers a $149 online seminar on how to “invoke the romantic mysteries” and another on aging miraculously (though, that seminar will cost you a wonky $249) is casting a spell on America.

Though the "love is a battlefield" speak Williamson leaned on pretty heavily during last month's debate was at a minimum this time, she may have provided a historical debate first by using the words “dark psychic force” to describe the “collectivized hatred” under President Donald Trump, threatening that Democrats will see “some very dark days.”

Not only was 66-year-old Williamson the most searched Democratic presidential hopeful, but she arguably received the most raucous burst of applause from the Fox Theatre audience when she did some “radical truth-telling” in regard to the Flint water crisis.

“Flint is the tip of the iceberg," Williamson said. "I was in Denmark, South Carolina, where there is a lot of talk about it being the next Flint. We have an administration that has gutted the Clean Water Act. We have communities particularly communities of color and disadvantaged communities all over this country who are suffering from environmental injustice."

Born in Houston, Williamson lived in metro Detroit from 1998 through 2006 when she served as minister at the nondenominational Church of Today in Warren (now Ferndale's Renaissance Unity Church). Her curious role as head of the new age organization was the subject of a Metro Times cover story in 2001, which paints a similar portrait of the woman who used the word “wonkiness” to describe her opponents plans to defeat Trump in the 2020 election.

Tuesday's debate found Williamson taking a more political approach to bridge America's racial modern-day segregation than she did when she instructed white parishioners to hold hands with their Black neighbors, make eye contact, and apologize for the nation's history of racism, as she did during her time as Church of Today's leader. When asked why she believed she had authority on instating her proposed $200-500 billion reparations budget for descendants of slavery, Williamson dished out some impressive stage math that was neither fuzzy nor off base.

“If you did the math of 40 acres and a mule, given there were 4 to 5 million slaves at the end of the Civil War, and they were all promised 40 acres and a mule for a family of four,” she said without pause. “If you did the math today, it would be trillions of dollars, and I believe that anything less than $100 billion is an insult, and I believe that $200 to $500 billion is politically feasible today because so many Americans realize there is an injustice that continues to form a toxicity underneath the surface, an emotional turbulence that only reparations will deal with.”

This comment also received a sizable applause in Detroit.

She also re-invoked her clever Michael Moore-esque catchphrase when discussing America's flawed “sickness-care system” and later, took on her peers with what might be her most powerful punch of the evening. When asked about college costs, she questioned the hopefuls' commitment to the party's moral code.

“I almost wonder why you’re Democrats,” she said. “You seem to think there’s something wrong about using the instruments of government to help people.”

Not everyone is impressed by Williamson, however, who has previously spoken out against vaccinations and antidepressants.

Williamson made some great statements tonight that other candidates on that stage can’t or didn’t. That doesn’t erase the thousands of harmful and boneheaded statements she’s made elsewhere, for years.

Grifters are grifters because they know how to sell. https://t.co/sANqiJ8Kqs

While she made no mention of her first order of business as President — which, according to last month's debate, would entail a sassy call to the prime minister of New Zealand — she pulled some classic Williams-isms for her closing statements, making us wonder if she knows something we don't — which is only mildly unsettling.

“You can’t fight dog whistles. You have to override. And the only way you can override them is with new voices, voices of energy that only come from the fact that America has been willing to live up to our own mistakes, atone for our own mistakes, make amends for our own mistakes, love each other, love our democracy, love future generations“ she said. “Something emotional and psychological that will not be emerging from anything on this. It will emerge from something I’m the one who is qualified to bring forth.”

How about we bring forth some sage?

That said, Williamson is polling at 0 percent, according to a recent poll. Meanwhile, Bernie Sanders and Elizabeth Warren lead the pack among Tuesday night's debaters, polling at 20 percent and 14 percent respectively.

Night No. 2 of CNN's debates continue at 8 p.m. Wednesday.