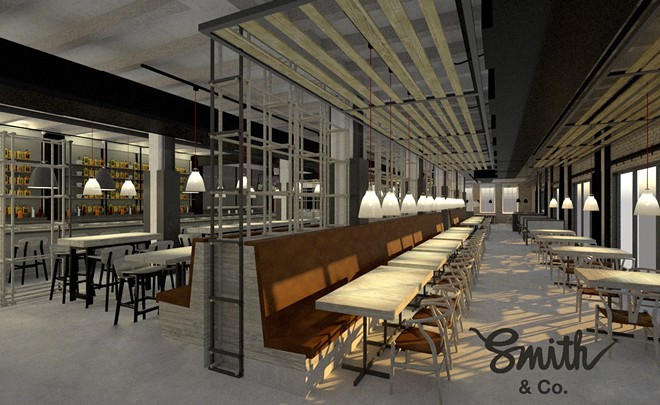 A new restaurant and brewery with a “deliciously Detroit vibe” is planned for Detroit’s Cass Corridor.

Smith and Co. will feature new American cuisine with locally sourced ingredients when it opens inside a renovated 102-year-old building at 644 Selden St. between Second and Third avenues. A few months after its planned September opening, the adjacent Nain Rouge Brewery will launch with a patio and courtyard that it'll share with Smith and Co.

The restaurant, which is named after the building’s former occupant, Smith Welding Supply & Equipment Company, will be sleekly refurbished with wood, bricks, metal, and concrete. It includes a dining area that can seat up to 160 people and a concrete bar with space for 19 people.

Volume One Design Studio, an international architectural and urban design firm, “created an atmosphere that encompasses the natural beauty of the Michigan outdoors with a mix of urban elements,” according to the restaurant’s news release.

The restaurant was developed by Jon Carlson, Greg Lobdell, and Chet Czaplicka.

The restaurant plans to hire 75 employees. For more information on applying, visit the restaurant's website.