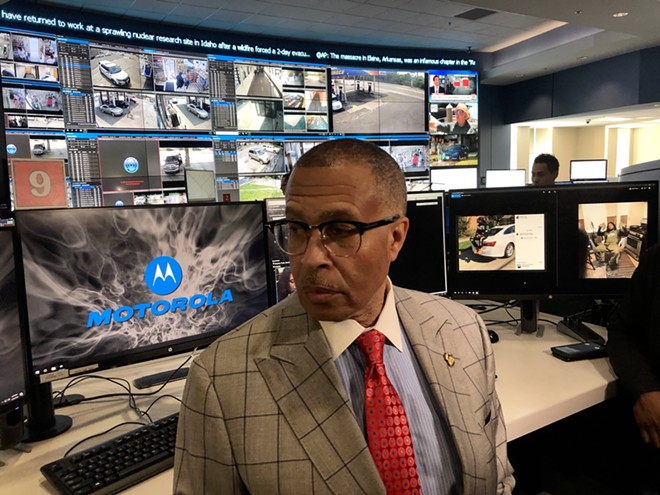 A broad coalition of civil rights groups is urging the Detroit Board of Police Commissioners to reject the city’s use of facial recognition technology because it is “flawed and dangerous” and "can give rise to unnecessary civil rights violations."

The 11-member police commission is expected to vote as early as Thursday on a policy governing the use of the controversial technology, which police have been quietly using for nearly two years without public input.

Citing research that shows the face-scanning software is racially biased and prone to errors, the coalition of 12 organizations co-wrote a five-page letter warning commissioners about the consequences of a technology that other cities are banning.

"Allowing discriminatory facial recognition technology to operate in a majority Black city will exacerbate all the racial bias already pervading police practices in Detroit," the letter reads. "A city like ours should be taking the lead in resisting the use of racially biased surveillance technology — not serving as one of its leading proponents."

The coalition is just the latest to call for a ban on the technology since Georgetown Law's Center on Privacy & Technology published an alarming report in May that featured Detroit's expanding surveillance network and $1 million software. In the past three months, three U.S. cities have banned the technology; U.S. Rep. Rashida Tlaib introduced a bill to prevent facial recognition technology from being used at federally funded public housing units; and lawmakers in the state Senate and House are mulling legislation barring the software.

In September, Detroit Councilwoman Mary Sheffield plans to propose a ban on the technology in the city.

Despite overwhelming backlash, the police commission appears to have enough votes to approve a more restrictive policy that would allow DPD to continue using the technology. Under the policy, police would be prohibited from scanning faces on live video; the technology would be limited to still images of suspects accused of felonies; and an officer who violates the policy would be fired and face potential criminal charges.

Here is the new facial recognition technology policy that the Board of Police Commissioners could approve as early as today. Opponents are urging the commission to ban the technology. pic.twitter.com/P45SMirvy4


The coalition says anything short of a ban "threatens to turn Detroit into a national 'leader' in surveilling its own residents."

“Every Michigander is at risk of losing their rights to privacy and due process,” said Tawana Petty, data justice director for the Detroit Community Technology Project, in a press release. “By having your photo taken for a state ID, you are opening the door to being included in a Michigan State Police database that is now being used for facial recognition — a database that the Detroit Police Department has also leveraged for its use. This is not what anyone signed up for.”

The coalition says the money would be better spent on community policing to rebuild trust between police and the community.

“The proposed facial recognition policy would break the trust between immigrant communities and the Detroit Police Department,” said Dawud Walid, executive director of the Michigan chapter of the Council on American-Islamic Relations (CAIR-MI), in a press release. “Rather than investing millions of dollars in facial recognition technology that instills fear and targets our communities, we should be investing in the services and resources they need to prosper.”