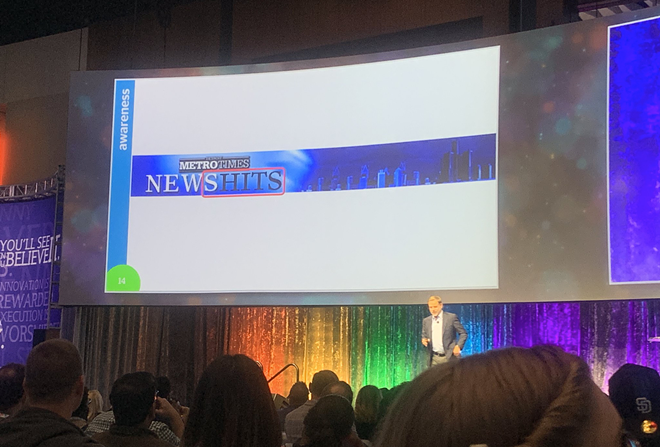 It has come to our attention that Quicken Loans executives Bill Emerson and Jay Farner teased ol' Metro Times earlier this week during ISMs Day — an orientation of sorts that introduces new employees to the "ISMs," or the pillars of the corporate culture of QL and its so-called family of companies.

According to a tipster, Emerson and Farner used the header graphic for Metro Times' news blog, "News Hits," as an example of one of its core ISMs: "Always raising our level of awareness."

We went to the MT archives, dusted off an old ISMs in Action! handbook given to us by a former QL employee, and learned that "Always raising our level of awareness" is about keeping a keen eye for detail. That section of the book contains examples of signage with funny typos, like a Subway restaurant sign with a "lease" sign unfortunately positioned over it so it reads "SLEASEY" and other unintended visual gags. As a former QL staffer explained to us, QL head honcho Dan Gilbert is rather fond of dad humor.

OK, fair enough. Our old "News Hits" graphic had no space between the two words, making it kind of look like it said "New Shits" — which Emerson and Farner intimated was appropriate given the quality of journalism at this paper or something to that effect, according to our tipster. (I had the graphic changed some time ago, not long after becoming Editor in Chief, after one too many trolls brought it up on Twitter.)

Of course, Quicken Loans execs might have an ulterior motive here. Metro Times has printed not-so-flattering stories about the company in the past, so maybe this was QL's way of going all President Trump on us and calling us "fake news." In fact, Trump has called Gilbert, who donated $750,000 to the president's record-breaking $107 million inauguration, a "great friend"; the inauguration committee is under federal investigation for possible money laundering and potential quid pro quo.

Trump calls Dan Gilbert a 'great friend' and supporter during strange photo op
By Lee DeVito
News Hits
On the other hand, attacking MT would go against another one of the company's ISMs: "Ignore the noise."

From the ISMs handbook: "Will you allow noise to keep you from winning? ... The noise may fluctuate in volume, but your determination to press on in spite of it (ignore it!) will make all the difference to you and our family of companies."

Then again, this is something Gilbert has had a problem doing in the past, often firing back at the media and reporters on Twitter.

Anyway, it's not like Quicken Loans has never made an embarrassing graphic design error. In 2017, the year of the 50th anniversary of Detroit's 1967 summer of civil unrest, Gilbert's company Bedrock Detroit drew criticism for a window graphic that said "See Detroit like we do." The photo featured only white people — in a city where the majority of residents are Black.

Gilbert swiftly apologized for the "tone deaf, in poor taste" image, explaining that it was part of a larger campaign that was meant to be more inclusive, and Bedrock wound up scrapping the campaign entirely.

Dan Gilbert apologizes for 'tone deaf' Detroit ad
By Lee DeVito
News Hits
So taking Gilbert's lead here and borrowing from the language he used at that time, I want to apologize for the "New Shits" blog: Although not intended to create the kind of feelings it did, the slogan/statement we used on these graphics was tone deaf, in poor taste, and does not reflect a single value or philosophy that we stand for at Metro Times.

However, if "New Shits" has been added to the latest edition of the ISMs handbook, can someone please hook us up with one for our archives? Much appreciated.