Border Patrol is harassing brown US citizens on Belle Isle 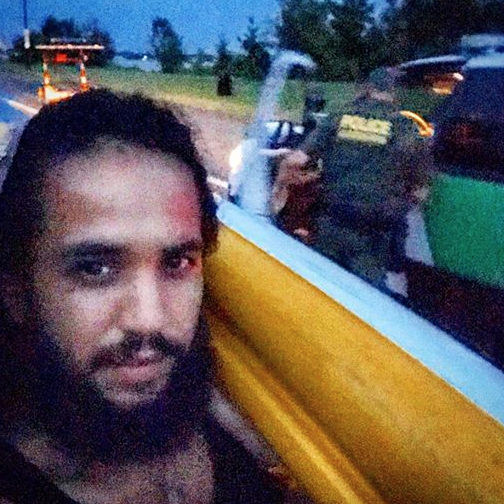 Belle Isle is a place to relax, sit in the sand on the beach, birdwatch, kayak, bike, and catch a quiet break from the insanity of the city across the channel.

Unless you're a person of color — then the island is something else: a place where you risk harassment and detainment by the garbage humans at the Border Patrol, who regularly monitor the island. Multiple witnesses have told Metro Times that officers are stopping and questioning people of color who are U.S. citizens.

Antonio Rafael, a local urban farmer, teacher, and activist who was born in Detroit to a mother from Puerto Rico and a dad from Texas, was one of the latest targets of the overzealous agency.

Rafael tells Metro Times he was confronted in mid-July by a Border Patrol agent who shined a light on him at dusk as he walked his kayak back to his car. The officer questioned Rafael, asked him for citizenship, demanded to know which hospital Rafael was born in, and threatened to ticket him for boating at night without a light.

Rafael says he simply tried to defuse the situation as quickly as possible.

"I wish I had the presence of mind to tell him how I was feeling, but my inherent reaction to a police officer is more like behaving out of survival, and telling them what they need to hear to go away and get past this interaction in a healthy way," he says, noting that the encounter could've easily gone sideways.

"If I was somebody who had a Spanish accent, if I wasn't more obviously American with a Midwest accent, then what would that situation have looked like?" he asks.

Indeed, Border Patrol and ICE detain hundreds of U.S. citizens annually, often illegally holding them for days, weeks, or months, even after proof of citizenship is presented. Earlier this year, it took the ACLU's involvement to free a decorated Marine who ICE detained in Grand Rapids. A Dallas teen was recently detained for nearly a month in June, and there's report after report of similar situations.

Such nightmares are an obvious consequence of Trump's hardline, nationalist immigration policy (Rafael notes that the deportation machine Trump fine-tuned and effectively uses to terrorize immigrants and U.S. citizens was actually built by Obama). Even if there are people sneaking across the Detroit River from Canada, there is no justification for detaining, questioning, and harassing innocent people, or disrupting life in America to such a degree that people of color can't go to Belle Isle without confrontation.

Rafael also notes the amazing irony in the situation — his father is Native American.

"I'm more American than Trump is. My roots here are much deeper than his are. Probably the same with the [Border Patrol agent]," he says.

What does the situation mean for Belle Isle?

"I'm not used to it happening on Belle Isle," he says. "It has always been a safe, cool place to be — unless you're doing something wrong.

"I love that they're fixing it up, I think it needs an uplift, but one of the negative aspects is that Border Patrol is going to be there, and the state cops are there, too."

He posted this to Facebook after the July 18 incident.


I feel conflicted bout Belle Isle because as I left Border Patrol pulled up and harassed me. A couple days ago.. earlier in the day.. kayaked out through Bell Isle’s inland river/ponds... almost made it to the “Detroit River” but it got dark... and I decided to portage (walk) my kayak back to my car rather than kayaking in the dark. I stopped walking to snap this photo right where the road close to the eastern side of the island. The puddle looked amazing with the late sunset, so I stopped to flick the wet whip.. I noticed the truck lights stop along the construction barricades, and the bright lamps flash on me. I thought it was a normal state cop... but it was #borderpatrol. #lamigra #ftp #newdetroit #homelandsecurity as most know, Michigan is within the 100 miles of the border making it homeland security territory... border patrol is nothing new.. they patrol my hood, patron our restaurants, and my jealously paternalize this green jewel. He thought I might have come from Kkkanada to the island or something...

Metro Times previously wrote about immigrants rights in the event of a confrontation with Border Patrol or ICE. And if you're a U.S. citizen who immigrated, speaks with an accent, or has dark skin — it might be a good idea to keep your paperwork in a spot where your family can find it, and post an immigration attorney and Congress member's numbers by a phone.