Mayor Mike Duggan pledged to board up every vacant house on the east side, beginning with a home at Mack and Mt. Elliot, where Tammy Jones’ decomposed, naked body was found on June 5.

The story prompted Police Chief James Craig to warn about a suspect serial killer and rapist preying on women in abandoned houses on the city’s east side. Police believe the serial killer used the house to attack another woman, who managed to escape. The city-owned house was his home base, police said.

But on Tuesday, the house was open to trespass. The plywood that was sealing the front and side door was peeled back on the house, which is just blocks from the Heidelberg Project, a popular tourist destination.

Duggan’s spokesman John Roach tells Metro Times the city was not aware the house was open and will board it up again Friday. It's expected to be demolished soon, Roach said.

So far, Roach said, workers hired by the city have boarded up about 900 houses.

Trouble is, plywood does little to keep people out of vacant homes, which are havens for criminals. That's why Detroit Public Schools sealed its abandoned buildings with metal panels.

Under Duggan’s leadership, the city has demolished more than 12,000 houses.

In July, the suspected serial killer and rapist, Deangelo Martin, was charged with sexually assaulting two other women who survived the attacks. Police believe he killed at least three women in vacant houses, but charges in those cases have yet to materialize.

Detroit police declined to comment on the unsolved cases Thursday. 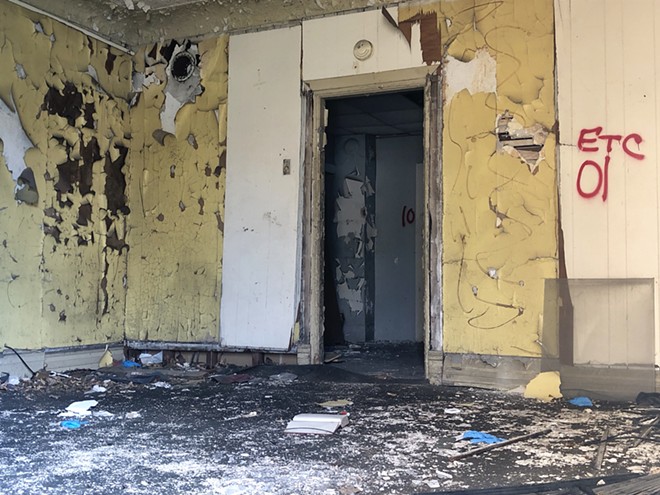