White nationalist propaganda cropping up in Detroit and its suburbs 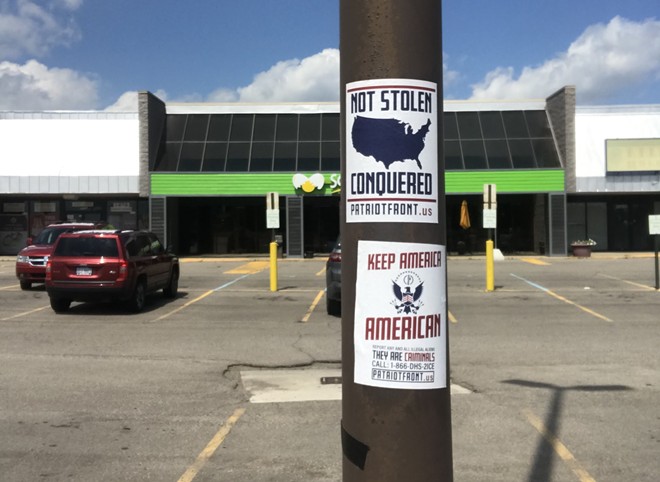 Propaganda for a white supremacist group is increasingly appearing in Detroit and its suburbs.

In the past week, propaganda for Patriot Front has been found on light poles in Detroit and Roseville. Already this year, the Anti-Defamation League has documented Patriot Front fliers found in Lansing, Ferndale, Dearborn, Southfield, St. Clair Shores, Mt. Clemens, and Mt. Pleasant.

The Anti-Defamation League and the Southern Poverty Law Center, both of which monitor hate groups, identify Patriot Front as a white nationalist group that advocates the formation of a white enthnostate. The group was formed by Thomas Rousseau, one of the leaders of the violent “Unite the Right” rally in Charlottesville, Va., in August 2017.

“Patriot Front’s activism typically consists of anonymously posting flyers, dropping banners off buildings or overpasses, or performing miscellaneous acts of public service such as park cleanups," the Southern Poverty Law Center states on its website. "When PF orchestrates protests or public appearances, they are typically tightly choreographed and scripted to maximize propaganda value. Virtually all its activities are undertaken with propaganda value in mind.”

Metro Times discovered three Patriot Front stickers posted on light poles along Woodward Avenue in Midtown and along Cass Avenue in the Cass Corridor. One of them read, "Better dead than red." Another read, "REJECT POISON," and included a link to the group's website.

Local resident Collin Keen found two Patriot Front posters on a light pole in the parking lot of a bingo hall on 13 Mile Road near Little Mack Avenue in Roseville. One of the posters stated, "Not Stolen, Conquered," referring to the U.S. The other read, "Keep America American," and encouraged people to call federal authorities on undocumented immigrants.

"When I first saw the flyer I was initially shocked," Keen tells Metro Times. "I’ve heard of many right-wing groups that have used nativist language and images before, but seeing it in person was another story. After the horrific events across the United States and the world, people should be informed about the white nationalists' ideologies and how they can almost be painted in a mainstream light."

He adds, "The flyer with the slogan 'Not Stolen, Conquered' is just another trick that fringe groups use to try and put their terrible ideologies into the mainstream dialogue. It’s important for people to recognize when groups and organizations talk about a return to 'pan-American identities' and 'American identity,' they only want to include white Americans. I think it’s important for the people of metro Detroit to know and understand that these groups at their core want nothing but violence."