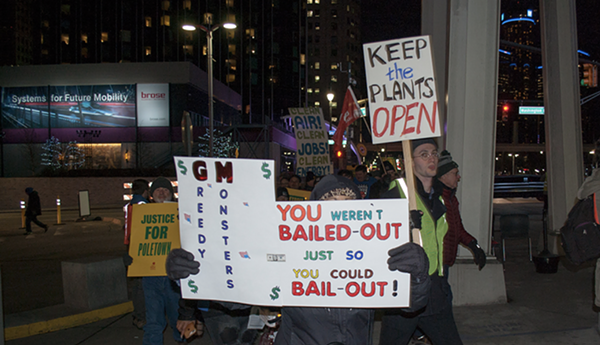 Nearly 96 percent of UAW workers at the Big Three automakers have voted to authorize a strike, giving the embattled union a bargaining chip in its upcoming contract negations with General Motors. The strike vote happened last week, with 96.4% approval from workers at GM, 95.98% at Ford, and 96% at Fiat Chrysler.

The UAW released the vote results on Tuesday. The routine vote doesn't mean there will necessarily be a strike, however, nor does it mean that there is more of an appetite for a strike than there has been at other times. In fact, the numbers in support of a strike are actually down from the last vote from four years ago, which workers at GM and FCA supported by 97% and Ford at 98%.

Today, the UAW represents nearly 150,000 hourly workers across the entire Big Three. Earlier this year, the Big Three announced massive cuts to its workforce, including at GM, which called for cutting more than $6 billion in costs and more than 14,000 workers.

Backlash against General Motors is helping plant the seeds for a green revolution
By Lee DeVito
Local News
"No one goes into collective bargaining taking a strike lightly. But it is a key tool in the tool belt as our bargaining team sits across from the company," UAW President Gary Jones said in a statement. "Ultimately, the company holds that destiny in their hands as they bargain. Clearly the UAW stood up for them in a very dark time, now that they are profitable it is time for them to stand up for all of us."

The contract negotiations come at a pivotal moment for the UAW and the auto industry, as auto sales are slowing and President Donald Trump is waging a trade war.

It also comes as the union is deeply bruised, with a federal probe into leadership corruption leading to UAW President Gary Jones’ home being searched last week. So far, eight union leaders at the UAW and FCA have been convicted, and charges were filed last month against Michael Grimes, a former UAW official assigned to the union’s GM department, for allegedly receiving $2 million in kickbacks.

The UAW's contract with GM expires on Sept. 14, though the deadline could be pushed back.