PETA protests the return of UniverSoul Circus in Detroit 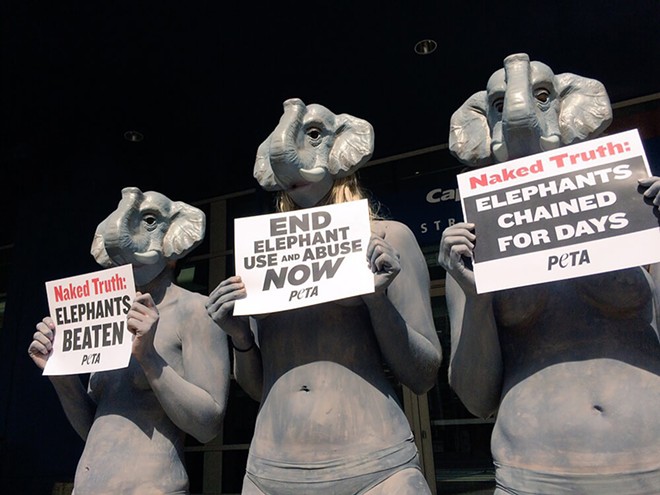 The UniverSoul Circus returned to Detroit Thursday night for a four-week 47-show engagement at the Aretha Franklin Amphitheater. As with previous visits, the Atlanta-based traveling circus was greeted by a group representing the People for the Ethical Treatment of Animals, who protested years of animal abuse, neglect, and enslavement at the hands of UniverSoul trainers and performers.

Founded in 1994, UniverSoul Circus is billed as “a circus like no other” for its high percentage of performers of color who participate in dance, stunt, and high-flying acrobatic acts. Like other circuses, however, UniverSoul has an extensive rap sheet when it comes to its history of animal abuse, according to PETA.

There are numerous reports of lacerations, injuries, and use of bullhooks, as well as keeping tigers and other large cats in cramped enclosures while chained. (A disturbing video of a distressed UniverSoul tiger whose foot is trapped in the cage's sliding door emerged in 2011.) There are multiple accounts of zebras escaping circus grounds, including stops in Philidelphia and Oakland, California, as well as reports that UniverSoul forces lame and arthritic elephants to perform, failing to provide proper veterinary care for its animals.

PETA's director of student campaigns and influence, Rachelle Owen told The Detroit News that UniverSoul appears to have eliminated elephants and tigers from its acts. The circus' official Instagram does not appear to have posted any recent images or videos of exotic animals, save for a post from 2017 with an image of a camel. Earlier this year, PETA released a video of a UniverSoul employee punching a camel in the neck while giving rides to circus goers.

Last year, New Jersey and Hawaii became the first states in the U.S. to ban the use of wild animals in circuses and traveling shows. Currently, Michigan does not have any such legislation in place beyond exhibition requirements that prevent contact between what they define as large carnivores and the public. Traveling circuses and shows in Michigan must also meet or exceed the requirements defined in the Animal Welfare Act.

UniverSoul performances will run through Sept. 29.