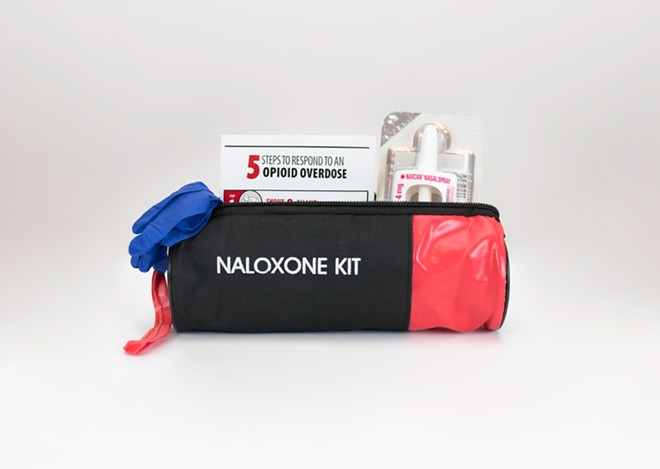 The Michigan Department of Health and Human Services has partnered with over 1,000 pharmacies statewide to sponsor “Naloxone Distribution Day,” an effort to help Michiganders access the widely used overdose-reversing drug.

On Saturday Sept. 14, Naloxone — commonly known as Narcan — will be distributed by pharmacists across the state on a first come, first served basis. The state will not require any prescription, proof of identification, or insurance information.


Naloxone is used by paramedics and emergency medical services in all 50 states to combat the effects of opioid overdose. The drug can be administered in various ways, including an auto-injection and a nasal spray.


According to the National Institute of Drug Abuse, “[Naloxone] can very quickly restore normal respiration to a person whose breathing has slowed or stopped as a result of overdosing with heroin or prescription opioid pain medications.”


The drug also acts as an opioid antagonist, blocking opioid receptors in the brain, which can also help to counteract an overdose.


The MDHHS has purchased over 55,000 Naloxone nasal spray kits and will be shipping about 52,000 to pharmacies in the Lower and Upper peninsulas. The rest of the kits will be distributed at the Recovery Walk on Belle Isle in Detroit, also on Saturday.


Naloxone Distribution Day comes less than a month after Gov. Gretchen Whitmer signed an executive order to create the Michigan Opioids Task Force. According to a press release from the governor’s office, the task force brings together “leaders across state government to tackle the opioid epidemic.”


“Right now, Michigan is among the states with the highest levels of opioid prescriptions and overdose deaths, with 2,053 overdoses in 2017 alone.” Whitmer said in the release. “This task force will bring us one step closer to finally ending the opioid epidemic in Michigan and keeping families safe.”


You can find a pharmacy near you that will be distributing free Naloxone nasal spray kits.

1. Lay the person on their back to give the medication.

2. Remove the naloxone nasal spray from the box. Peel back the tab to open the spray.

3. Do not prime the nasal spray before using it.

4. Hold the naloxone nasal spray with your thumb on the bottom of the plunger and your first and middle fingers on either side of the nozzle.

6. Press the plunger firmly to release the medication.

7. Remove the nasal spray nozzle from the nostril after giving the medication.

8. Turn the person on their side (recovery position) and call for emergency medical assistance immediately after giving the first naloxone dose.

9. If the person does not respond by waking up, to voice or touch, or [by] breathing normally, or responds and then relapses, give another dose. If needed, give additional doses (repeating steps 2 through 7) every 2 to 3 minutes in alternate nostrils with a new nasal spray each time until emergency medical assistance arrives.

10. Put the used nasal spray(s) back in the container and out of reach of children until you can safely dispose of it.