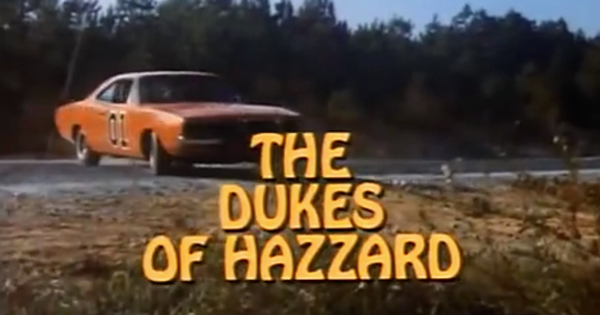 A Muskegon cop who was fired after racist memorabilia was found in his house, including Confederate flags, maintains that this is all a big misunderstanding — and says he is just a history buff and fan of the classic action-comedy television series The Dukes of Hazzard.

Officer Charles Anderson was fired earlier this month after he left a numerous Confederate flags and a framed KKK application form hanging in his house while a Black man was inside as part of a real estate showing. The man, Rob Mathis, posted a photo of the framed KKK application card to Facebook, where it went viral. Soon after, Muskegon P.D. launched an internal investigation.

Now, while it may seem Anderson's actions and attitudes might be consistent with a recurring issue of law enforcement officers getting caught doing racist shit in private, Anderson says there is a simple explanation for the memorabilia: that he just happens to be both an amateur historian and a huge fan of The Dukes of Hazaard, which famously featured "The General Lee" — a 1969 Dodge Charger with a Confederate battle flag painted on the roof.

Anderson said the flags "are a part of his extensive Dukes of Hazzard collection," The Detroit Free Press reports, and that he "'loves everything' about the show and has been to the fan convention, Duke Fest, several times." The framed KKK application form, Anderson says, is from his antique collection; he says he has a passion for U.S. history from the late 1800s to the 1960s.

Anderson denied he was part of the Klan, and said that would be impossible because he is a Catholic, which would be considered a "target" of the hate group.

Curiously, the police department's 421-page report on its investigation revealed that Anderson had numerous run-ins with Mathis and Mathis' wife, Reyna, in the past. The Detroit Free Press reports:

The report later confirmed that the officer had six encounters with Robert and Reyna Mathis, dating to July 2008. For the first case, Robert Mathis was pulled over by Anderson for speeding, while Reyna Mathis in the passenger seat. They both exited the vehicle and refused the officer's orders. Anderson placed Reyna Mathis under arrest for refusing to follow his orders, and she struck him in the face and eye with her hand, causing minor injury. Robert Mathis was issued with a citation and released from the scene. Reyna Mathis was lodged in the Muskegon County Jail for obstruction and assault on an officer. She was sentenced for 60 days and $414 in fines.

In Oct. 2008, Reyna Mathis was involved in a bar fight and accused of assaulting another person. She was found to be intoxicated and was later arrested by Anderson for two Fail to Appear bench warrants. Reyna Mathis also went to jail for the incident.

The Confederate flag has been a touchy subject in Detroit lately.

This year, Detroit City Council rejected a planned Autorama Smokey and the Bandit-themed stunt jump because the show's 1977 Pontiac Firebird Trans has a Georgia flag license plate, which includes a Confederate flag design. In 2017, a General Lee replica crash-landed in front of Detroit's former Cobo Center as part of the Autorama show during a stunt jump.