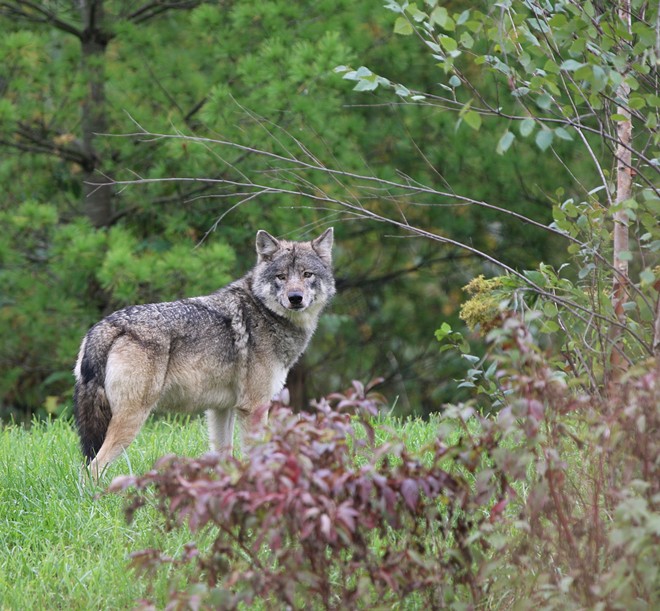 Just three months after the death of the Detroit Zoo's beloved 11-year-old gray wolf, Wazi, a new companion has been introduced to keep the zoo's lone wolf in mourning company.

This week, the Detroit Zoo welcomed Renner — a 3-year-old female gray wolf who arrived from the Wildlife Science Center in Minnesota. She joins the zoo's smoke-colored resident, 9-year-old Kaskapahtew, or Kaska, who arrived from the Minnesota Zoo in 2015 with Wazi, his female mate. Wazi died of cardiac arrest in June while undergoing surgery to remove a mass from her chest.

“We are pleased to welcome Renner to her new home and happy for Kaska to once again have a companion,” Scott Carter, chief life sciences officer for the Detroit Zoological Society, said in a press release. “The two are getting along well, and we are optimistic they’ll start a family in the coming year. Family is a critical part of the fabric of wolf society and is important to their well-being.”

Renner joins Kaska in the scenic and recently completed 2-acre Cotton Family Wolf Wilderness, which offers a variety of environmental elements, including rolling hills, grassy meadows, a stream, ponds, and elevated rock structures from which the wolves can oversee their habitat. Visitors can get up close and personal with Renner and Kaska via the zoo's Log Cabin observation window.

Gray wolves were one of the first species to receive the endangered species designation and protection offered by President Richard Nixon's Endangered Species Act of 1973. In 2008, gray wolves were delisted following a species reintroduction program that began in 1995 at Yellowstone National Park, when wolves were brought in from Canada. There are an estimated 6,000 gray wolves throughout the west and Great Lakes region, though many argue that the repopulation numbers are still considerably low and that the gray wolves are still at risk.