Rep. whose Detroit house was mysteriously demolished did not tell police she requested a bid to have it demolished 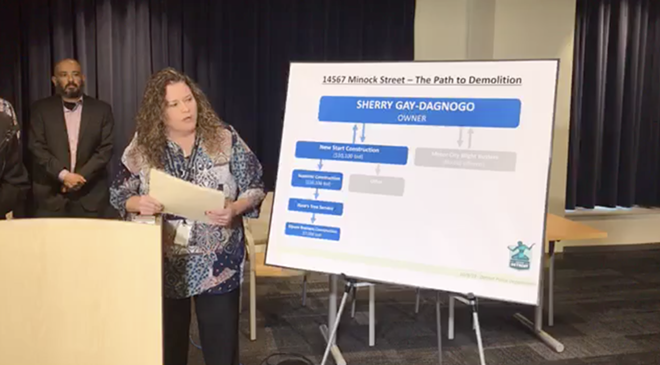 The plot thickens in the case of Rep. Sherry Gay-Dagnogo, a vocal critic of Detroit's demolition program who found a house she owned near the Brightmoor neighborhood had been mysteriously demolished last month.

Detroit Police Chief James Craig held a press conference Wednesday afternoon to reveal the department has identified Sherman Gipson of Gipson Brothers Trucking as a suspect. But Craig also revealed that Rep. Gay-Dagnogo had not disclosed to authorities that she had recently solicited a bid to have her home demolished — which provided a key to uncovering who was behind it.

Gay-Dagnogo said she did not think that information was relevant to the investigation, Craig said. But if she did, Craig said DPD would have found the suspect much more quickly.

"We're 11 days into an investigation that frankly we could have got done in two," he said.

DPD Lt. Rebecca McKay broke down the timeline with the aid of a flowchart, titled "The Path to Demolition" — which sounds like the name of a badass metal band album.

According to authorities, Rep. Gay-Dagnogo solicited a bid from Motor City Blight Busters to demolish her home earlier in September. On Sept. 20, an employee of Motor City Blight Busters went to the address to do an assessment, but found that the house had already been demolished. There was still an excavator where the house used to be; the MCBB employee took a photo for their records.

On Sept. 26, Rep. Gay-Dagnogo learned that her home had already been demolished. On Sept. 27, the police investigation began.

Detectives found a prescription label with Gipson's name on it at the site. Craig said police were able to locate a possible vehicle from footage from a nearby Project Green Light camera, Detroit's controversial surveillance program.

According to authorities, a company called Nate's Tree Service asked Gipson for an estimate to demolish the home on Sept. 19. Gipson quoted the company for $7,000. Nate's Tree Service then reported that quote to a company called Superior Construction, which put together their own bid to demolish the house for $10,100. That company then passed this along to New Start Construction, a partner with Gay-Dagnogo's nonprofit, the Coalition to Integrate Technology and Education.

Police say Gibson admitted he demolished the home when asked, but that he also did not pull the proper permits — nor did he get Gay-Dagnogo's permission to go ahead with the demolition. Craig said he could not speculate on a motive, like whether the demolition was a mistake made by an overzealous contractor, citing the ongoing investigation.

Regardless of motive, Craig says the department is in the process of preparing a warrant request for the Wayne County Prosecutors Office for malicious destruction of property over $20,000, a felony.

There are still many questions. Why would someone tear a house down for free? Why did Rep. Gay-Dagnogo solicit a bid to demolish the house that she previously told reporters she intended to give to a family in need — and then withhold that information from investigators?

There's also the fact that Gay-Dagnogo had been a vocal critic of Detroit's demolition program, questioning a proposed $250 million bond to tear down 16,000 homes across the city on her Facebook page, and voicing concerns over the lack of diversity in the city's demolition program. Is this all connected, or just a coincidence?

"How bizarre is all this to you?" one reporter asked Craig.

"Nothing shocks me, ever," Craig said. "I'm just going to be candid. There's not too much anymore that shocks me."