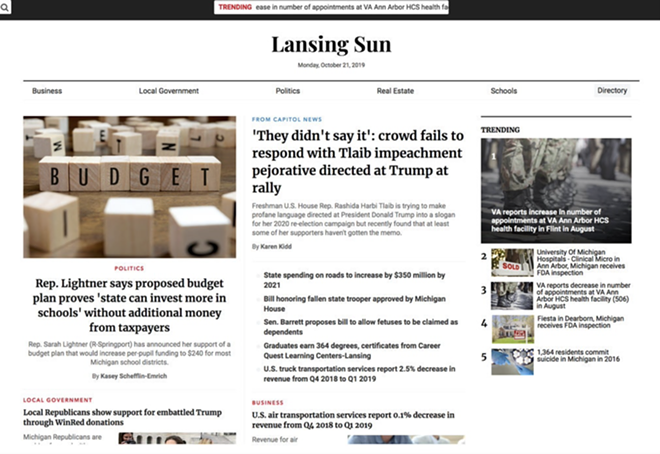 Despite President Donald Trump's routine taunting of the "fake news media," it seems someone working on behalf of the right wing has created that very thing in Michigan.

A network of nearly 40 websites made to look like local Michigan news sites have cropped up in recent weeks, with names like Lansing Sun, Ann Arbor Times, Detroit City Wire, Macomb Today, The Warren Sun, and others. At first, the websites look fairly convincing, but appear to be publishing nearly identical stories, mostly about local taxes and gas prices.

But many of the stories have a distinct pro-Trump bent, like a story about a crowd failing to respond to Rep. Rashida Tlaib's calls to "impeach the motherfucker" at a recent rally, or another about Michigan Republicans who are supporting Trump during the impeachment inquiry.

News of the websites was first reported by The Lansing State Journal on Sunday, and The New York Times picked the story up on Monday. They appear in a swing state right before an election year, and also come at a time when trust in local news is eroding — due in part to Trump's influence but also due to digital platforms like Facebook blurring the line between real and fake news outlets.

"The big issue is this extent to which they have gone to try to confuse about this being the site of a local newspaper," Matt Grossmann, director of Michigan State University’s Institute for Public Policy and Social Research, told The Lansing State Journal of the sites.

The websites do not have ads and appear to rely on cheap stock art and blurry screenshots. The writing is also, frankly, very bad.

"It doesn’t look like a business enterprise," Grossmann told the NYT. "News is struggling in general. It looks more like they’re trying to influence the political debate by targeting people who are already interested in that content."

According to the "About Us" section on the sites, the network is published by Metric Media, a company that says it was founded in 2014 to fill "the growing news void in local and community news after years of steady disinvestment in local reporting by legacy media." The Lansing State Journal found that many of the sites were registered in June and updated in August.

The About Me page states that Michigan could be just the beginning, as Metric Media plans to roll these sites out across the country.

"We were founded by a group of people deeply committed to addressing the growing news desert at the local level," the page reads. "This site is one of hundreds and eventually thousands that we are launching nationwide to fill that void in local and community news."

On Monday, Facebook announced an effort to fight misinformation on its platform ahead of the 2020 election. In the meantime, remember to be hypervigilant about what you're reading and sharing on social media, who published it, and why.