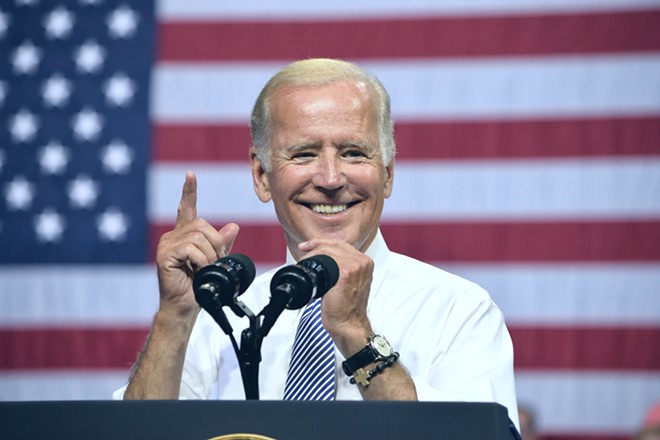 Joe Biden is leading in the Democratic presidential primary with 34 percent, according to the latest Emerson poll.

The former vice president is trailed by Sen. Bernie Sanders at 28 percent and Sen. Elizabeth Warren at 19 percent. All three candidates are leading President Donald Trump outside the margin of error.

Trailing the top three are Mayor Pete Buttigieg who has 8 percent in the most recent poll, and Sen. Kamala Harris with just 3 percent.

Sanders continues to receive strong support from voters in the 18-29 age range, with 73 percent of their vote, according to the poll. However, in the 30-49 age range, he’s tied with Warren at 28 percent. Voters over age 50 strongly favor Biden — who receives 53 percent of their support — while Sanders only receives 10 percent.

“In 2016, Sanders was able to shock the political establishment by winning Michigan, and it looks like his base of youthful support positions him do it again on March 10,” Spencer Kimball, director of Emerson Polling, said in a statement.

Meanwhile, though 50 percent of Michigan voters disapprove of the president and 47 percent support impeaching him, he still leads the other Republican candidates in the Republican primary, at 92 percent. Additionally, according to The New York Times, "Across the six closest states that went Republican in 2016, [Trump] trails Joe Biden by an average of two points among registered voters but stays within the margin of error." Those battleground states include Michigan, which trump won in a surprise upset in 2016.

However, the newspaper warned that this small margin (based on a New York Times/Siena College poll earlier in October) is nothing to celebrate, noting that all Democratic candidates currently trail in counties and precincts which voted for Barack Obama and later voted for Trump. It continues, "The president's advantage in the Electoral College relative to the nation as a whole remains intact or has even grown since 2016, raising the possibility that the Republicans could — for the third time in the past six elections — win the presidency while losing the popular vote."

This University of Michigan professor created some election maps that actually make sense
By Alysa Zavala-Offman
News Hits
Stay on top of Detroit news and views. Sign up for our weekly issue newsletter delivered each Wednesday.