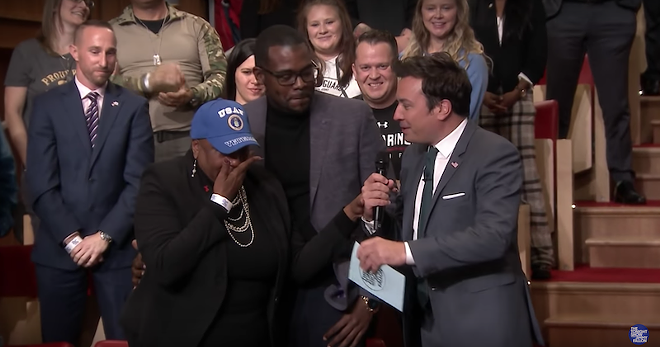 
The Foundation picks nominated veterans all over the country to give $25,000 for home repairs.


Many veterans were in the crowd for the show that night, and Love was shocked when Fallon called her name.


Joyful and teary-eyed, Love hugged Fallon and couldn’t believe what was happening.


"Vernitta, is this your son Aaron?" Fallon asked. "Aaron is the one who nominated you. Aaron tell me a little about your mom."


"My mother is a single mother from the east side of Detroit. She raised me by herself," Aaron told Fallon.


"She’s retired, but at the same time I don’t know anybody more selfless than her. She gives to the homeless vets in our area and is always trying to do things in the community. I entered her in the contest because her house is home, but behind the scenes it’s a wreck."


Love was shocked when she found out she was given $25,000. But when Fallon broke the news and told her she was getting $50,000 instead, she was in disbelief.


"Congratulations to you and thank you for your service," Fallon told Love as she continued to cry tears of joy.