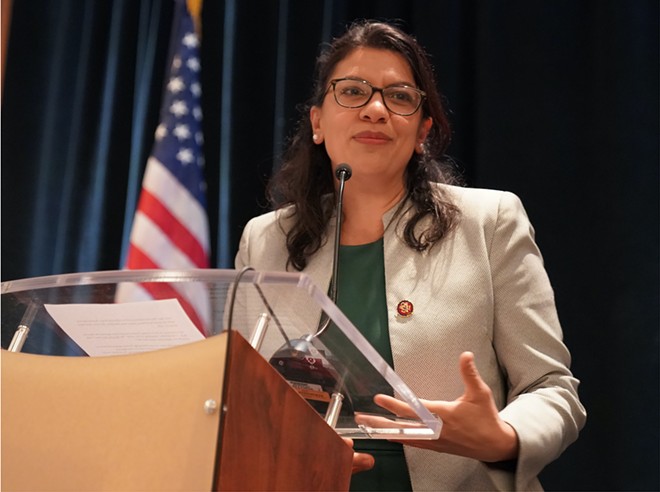 Rep. Rashida Tlaib is defending her use of campaign funds to pay herself a salary, arguing against a widening House Ethics Committee probe that the payments fell well within Federal Election Commission rules.

She's also using the opportunity to shine a light on the financial barriers that prevent "everyday people" like her from running for office.

"It is our duty to ensure that Congress becomes a place that is made for people like me and everyday people who want to have a seat at the decision-making table," she said in a statement.

At issue are two payments made to Tlaib after the Nov. 6, 2018 election: a $2,000 payment on Nov. 16 and a $15,500 payment on Dec. 1, according to a Board of the Office of Congressional Ethics report. Under federal regulations, candidates are allowed to receive salary payments from their own campaigns, but they must be for work performed through the date of the general election. The House Ethics Committee said Thursday it's extending its investigation based on the OCE report.

Before the election, Tlaib received $28,000 worth of payments from her campaign.

According to a letter from Tlaib's lawyers delivered to the OCE, she accepted the salary after consulting an election law attorney and deliberating with her campaign advisors. Tlaib's lawyers said the payments that occurred after the election were "to catch up on the salary which she had accrued, but had theretofore been withheld."

Before running for Congress, Talib supported her family as a full-time employee at the Sugar Law Center for Economic & Social Justice. But as the campaign ramped up, Tlaib says she was forced to cut her employment at the Sugar Law Center by 85 percent — reducing her income to $200 per week, according to the letter from her lawyers.

In April, she emailed her campaign manager, saying she was "struggling financially" between rent and mortgage. Weeks later, she said, "I am just not going to make it through the campaign." She considered increasing her work at Sugar Law.

Eventually, she requested $2,000 per two weeks to make ends meet.

After this, her campaign manager Andrew Goddeeris told her under FEC guidelines she could receive around $7,900 per month from the campaign committee, but warned "she might face political retribution for allegedly 'using her campaign funds to enrich herself.'"

"Shortly thereafter, the Campaign made the politically difficult decision to pay the permitted salary to Representative Tlaib, while understanding that the salary would rally below the maximum amount permitted, would be paid only according to availability of resources, and would be disclosed on its FEC reports," the letter reads. "Thus, she received a salary for the remainder of the campaign, but never the full amount permitted."

The statement from Tlaib's lawyers called the investigation "unprecedented."

"In its eleven-year history, OCE has never recommended that the Committee investigate an alleged violation that occurred prior to the Member's being elected," they wrote. The present matter, involving no conscious disregard of any law of regulation, is a poor choice to depart from precedent. The Committee's own precedent shows that OCE should never had initiated the review, and the Committee should now dismiss it."

In a statement, Tlaib denied any wrongdoing.

"I am glad that the public now has access to the facts of this matter and can see for themselves that I have complied with FEC regulations and the law at all times," she said.

She also took time to explain the financial struggles she faced on the campaign trail.

"When I ran for Congress in 2018, I had to leave my job as a civil rights attorney at the Sugar Law Center for Economic & Social Justice to focus on campaigning full-time, while continuing to support my two young sons as a single mother," she said. "FEC regulations allow campaign committees to pay a limited salary to candidates to enable them to curtail outside employment to focus on their campaigns — a sacrifice incumbent members of Congress don’t have to make. This rule was created so that people of average means, who can’t afford to forego income, can run for office without that barrier."

Tlaib said she hopes her experience "will clear more room for people like me to run for office by availing themselves of FEC innovations that level the playing field, like paying a non-incumbent candidate salary or covering childcare expenses with campaign funds, so that financial privilege is not a prerequisite to participate in our democracy."

Meanwhile, the House Ethics Committee is also investigating Rep. Bill Huizenga for misuse of funds after it found his campaign paid for his family to visit Disney World for three years in a row.