Rhino, a former stray dog in Detroit, is a good girl and she's doing great

Until February 2019, Rhino was one of the thousands of stray dogs that roam Detroit’s streets.

When Rebel Dogs Detroit, a no-kill rescue and shelter collective, found Rhino last winter, she was sick and skittish.


“She was totally feral,” explains Juniper Fleming, the director of Rebel Dogs Detroit, a group that shelters dogs through an in-home foster system. After catching her, Rhino initially refused to leave the live trap and later chewed through drywall and wooden studs. “She was quite a tough cookie at first,” Fleming says.

Rhino, like many dogs in Detroit, is a pit bull. As Metro Times reported in October, strays and neglected dogs cause injury and death in the city. Since 2017, more than 1,250 dog bites have been reported. In August, 9-year-old Emma Hernandez was killed by three pit bulls while riding her bike in her neighborhood on the west side of Detroit. Just over a week later, a small dog was killed and its owner, Jimmy Sanchez, was injured when two pit bulls broke into Sanchez’s yard.


One of the stray dogs pictured in the Metro Times cover story was Rhino. While that February 2015 image shows her pawing through trash, Rhino is now flourishing in a caring environment — showing the positive impact of organizations like Rebel Dogs Detroit. At any given time, Rebel Dogs Detroit has between 50 and 60 adult dogs in foster homes across Detroit and the metro area, plus 20 to 30 puppies.

"We were reading a rather good article in the Metro Times, speaking to the issues here in Detroit with lack of funding for animal control and other government entities," a post on Rebel Dogs Detroit's Facebook page read. "And imagine our surprise when we see, in one of the photos used to illustrate the article, none other than our very own Rhino! When we caught Rhino, she was terrified and went into a catatonic state whenever approached. She had a false pregnancy, and had a bloated body. She couldn't be safely confined — she would eat through aluminum, dry wall and solid wood — and hurt herself in the process."

Fleming says pit bulls are not inherently more violent than other breeds. She believes the focus of dog catching and rehabilitation efforts should be on helping to provide pet owners with the resources to care for their dog or finding a new home for it if necessary.

When Fleming and her partner founded Rebel Dogs Detroit in 2018, they were hoping to fill in the gaps left by other groups and city departments. Rebel Dogs Detroit captures strays that animal control officers or police officers can’t or won’t pick up. They also work with neighbors and focus on personalizing their response to the needs of the dogs and the communities they work with.'

“We entered into this with an understanding that working-class and poor people can be wonderful pet owners,” Fleming says. “We work with them to maintain resources for the dog.” 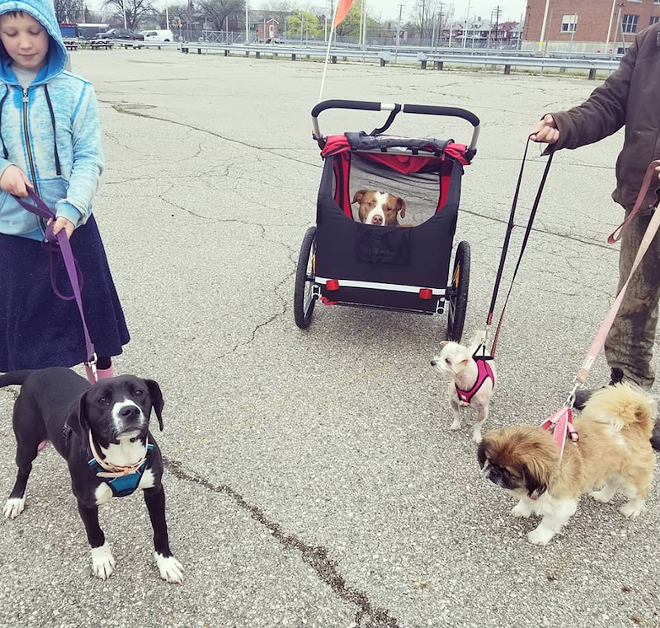 Fleming says Rhino has made immense progress over the last few months. Because she was so agitated during the first few months after she was rescued, she was unable to undergo heartworm treatment. Heartworm therapy requires one month of antibiotics in preparation, and dogs’ heart rates must be kept low during the heartworm treatment to avoid heart failure. Now, Rhino is calm enough to receive the necessary medications.


While Rhino was initially afraid to leave the house, Fleming was able to slowly acclimate her by pushing her around in a baby stroller until she felt comfortable being outside. Rhino is now able to socialize with Fleming and play with other dogs.

HELP! SNUGGLE NEEDED! . Nervous about getting your first foster dog? Well, Rhino and her friends are nervous about never getting a foster home! We have a range of dogs waiting for foster homes: . Some very dog social, like this tantalizing trio, and some who prefer to be kept separate from other four legged creatures. . Please consider fostering, so we can keep assisting the dogs who need us the most! . FOSTERING SAVES LIVES! . Reach out if this could be you! We provide all the food, supplies, and medical care! . #rescuedog #rescuedogsofinstagram #rescuedogs #dogsofinstagram #detroitdogs #dogs #dog#doggy #dogadoption #rescuepup #instapuppy #puppiesofinstagram #puppies #puppylove #detroit #detroitdogs #rescuedogsdetroit #adoptdontshop #upthepups #rebeldogsdetroit #RDD